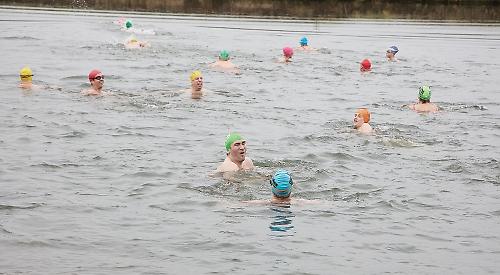 SWIMMERS braved near freezing temperatures in the River Thames for the traditional New Year swim in Wargrave.

The 18 villagers, most of whom wore swimming costumes rather than a wetsuit, got into the water at Ferry Lane at noon on New Year’s Day, cheered on by crowds of people on the banks.

Some swam to the other side and back while others opted to go only half way across the river before returning. Afterwards the swimmers went to a village pub to celebrate. Organiser Hannah Young, of High Street, Wargrave, said: “It’s something that a couple of us try to do every year but this year there were more people than usual because it was also our friend Ian Bacon’s 50th birthday. The water was about 4C but the air was quite mild so it wasn’t as chilly as it could have been. There was a lot of brandy being passed around on the bank!

“It was quite fun and there were a lot of onlookers.”