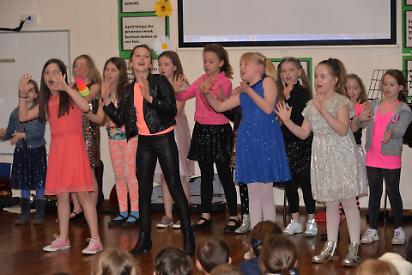 Children performed hits from four decades at the competition

Pupils at Rupert House School in Henley sang and danced to hits from across four decades as part of a music competition.

Youngsters from four houses were each given an era and put together their own song and dance routines for the event on Friday last week.

Nile house were given the Sixties and performed a medley of “Surfin’ USA” by the Beach Boys, Ben E King’s “Stand By Me” and “I’m a Believer” by the Monkees, while Amazon had the Seventies and performed Lynyrd Skynyrd’s “Sweet Home Alabama”.

Everest house gave a medley of music from the Eighties and Sahara, doing the Nineties, took on “STOP” by the Spice Girls.

Each house also had a solo singer, pianist and instrumentalist.

They were judged by Henley Mayor Julian Brookes and Jon Woodhouse, a peripatetic music teacher at the school.

They were joined by caretaker Paul Woodley and Arlette Halfhead, PA to the headteacher, who dressed as X-Factor judges Simon Cowell and Sharon Osbourne, complete with face masks.

The competition was won by Nile House for their Sixties medley and were presented with the house cup by the Mayor.

Cllr Brookes said: “It was a great competition. For the soloists to stand up in front of everyone and sing takes some nerves so that was very impressive.

“The singing and choreography was great and a lot of hard work went in to the whole thing.”

Headteacher Clare Lynas added: “This is a new departure for the music department and the enthusiasm amongst the children is delightful to see.

“The standard of choral singing here has always been very high and standards in instrumental music are rising rapidly, as witnessed by the music scholarships we win.

“I am thrilled to witness the independence and initiative shown by the girls in this latest project.”