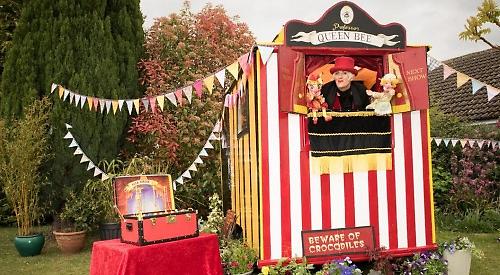 ONE of Britain’s top “sheds” will be among the attractions at this year’s Thames Traditional Boat Festival in Henley.

Teresa Verney Brookes, who goes under the show name of Professor Queen Bee, will be performing from her purpose-built Punch and Judy theatre.

She is a finalist in the Shed of the Year competition in the “entertainment” category.

Mrs Verney Brookes, 52, has performed at the festival and Fawley Steam Fair for the last three years but this year is the first time she will use her new performing space.

She began working on the project five years ago with a redundancy payment from the Royal Society for the Protection of Birds.

Mrs Verney Brookes, who lives in Reading, said: “With the money, which was not much, I set up as a Punch and Judy person.

“The shed was in a real dilapidated state when I first got it but I will be using it for the first time this summer.”

She also runs a mobile flea circus from the shed. In the winter it is put in her garden to store her characters.

Instead, the production company contacted her about appearing on its spin-off series Shed of the Year. She said: “The director and producer came to look at my shed and put me through to the finals.

“It’s really bright and colourful and they thought it was eccentric.”

The festival will take place at Fawley Meadows from Friday to Sunday, July 14 to 16,