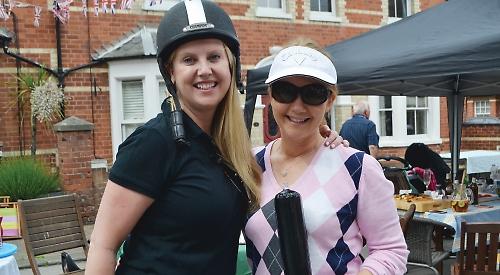 A STREET party with a sports theme was held in Henley on Sunday.

Scores of people sat in a line of tables along Marmion Road to eat and drink while being entertained by A Face in the Crowd, a band from London.

It is the seventh year running that the residents have organised a street party, decorating the road with Union flag bunting.

In 2011, they celebrated the wedding of Prince William and Kate Middleton.

The following year it was the Queen’’s diamond jubilee, in 2013 they marked the 60th anniversary of her coronation and last year it was Her Majesty’s 90th birthday.

Paul McSweeney, one of the organisers, said: “We don’t pick anything that is too high level and there are no strict requirements. People can follow it as actively as they want.

“This time we had sumo wrestlers, an American football player and a netball team and members of the band dressed as Subbuteo players.”

Mr McSweeney, who lives in neighbouring Grove Road, was helped with the organisation by his fiancée Amy Hillsdon and residents Ulla-Stina Persson, Sophie and Robbie Mills and Claire Beard.

The party ran between 1pm and 9pm and included a quiz organised by Mr Mills, dancing and children’s games, such as egg and spoon races, welly-wanging and skittles.

Marmion Road and part of Grove Road were closed for the day.

Mr McSweeney, who was part of the netball team, said: “We were lucky as the rain held off apart from a short shower.”

He added: “This all started with the Royal wedding and then we did the Queen’s birthday. We enjoy it so we carried on doing the party.

“It shows good community spirit and gives us a chance to raise some money for charity.

“We intend to carry on doing it every year.

“It’s a friends and family event. We all get on very well and we’re lucky there is such a nice group of people who enjoy each other’s company and the place they live.”

All adults pay £10 towards the cost of insurance and decorations.

The party raised £480 which will be split between the Chiltern Centre for disabled children in Greys Road, Henley, and the MS Society.