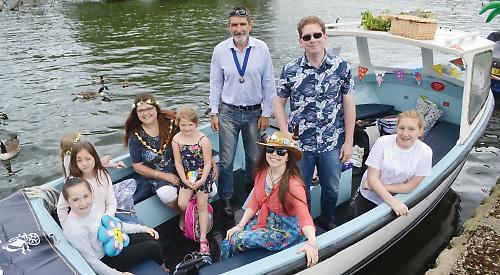 BOATS decorated with flowers and an amphibious car took part in a parade on the River Thames in Henley to mark the end of an alternative gardening festival.

About 20 vessels joined the floral flotilla for the third Chelsea Fringe Henley on Sunday.

They included cruisers, traditional wooden boats, rowing boats and a four being rowed by members of the rowing club at Phyllis Court Club.

They were decorated with an array of flowers and plants and some of the passengers added to the colourful spectacle by wearing Hawaiian-style shirts and garlands.

Hundreds of people gathered in Mill Meadows to watch the boats parade up and down the river, cheering and taking photographs.

The flotilla began by going upstream to Marsh Lock, where the boats turned round and then headed back downstream through Henley Bridge, where more spectators had gathered to see the vessels pass underneath.

At Phyllis Court, the boats turned round again and returned to Mill Meadows, where the celebrations continued with people picknicking and musicians performing on the bandstand.

Tim Richardson, the founder and director of Chelsea Fringe, was in a boat called Mrs Bouquet with the Henley organiser Victoria Newton and her husband Barry.

Mr Richardson, who grew up in Hurst, said: “It’s just gorgeous. Previously this has fallen on the first day of the Fringe and I’ve been too busy to come so I’m pleased to be able to come this year.

“It’s a wonderful show and all the boats are different, there’s so much imagination. Most importantly, people have had great fun decorating the boats, With Chelsea Fringe it’s about people, not plants.”

Mayor Kellie Hinton was in a hired boat called Snowdrop with her daughter Hallie, six, and fellow town councillors Dave Eggleton and Glen Lambert and their children.

Councillor Hinton, who wore a chain of flowers in her hair, said: “It was lots of fun. We had a boat from Hobbs which we decorated with help from Brakspear, flowers from Victoria Newton and some of our own bits. I was even trusted to pilot the boat for a bit!

“It was a great day and the community picnic side made it busier than in previous years.”

Other boats included Barelyawake with Henry Liddell, Neill Collins and Debbie and Chris Wermann with dogs Chewbacca and Daisy Duke on board and Muttley Crew, which Kim Potter, Judi Rowland and Marina Forsgren had decorated with flower garlands and brightly-coloured umbrellas.

Some embers of Henley Rotary Club were on board Sable Lady, which had been decorated by Annette March of White Gdn florists in Hart Street, Henley. Lyndon Yorke and Trish Steinhardt were in their amphibious car Platypus, which was decorated with inflatable palm trees while Mr Yorke wore a large top hat and colourful braces.

Henley brownies also had a boat, while several children took part in the parade in kayaks, including Mrs Newton’s son, Oscar.

On land, families gathered for picnics in deckchairs or on rugs on the grass and there were stalls selling food and drink, including one with cakes made by members of the Henley WI.

Mrs Newton, from Peppard, who runs the festival with Jane Macfarlane Duckworth, from Hambleden, said: “It has gone really well. Last year we had about 10 boats and this time we have just over 20 so we are really delighted.

“The level of decoration has gone through the roof — it’s just been amazing and we are so excited about it. People have come from all over the country because it’s the end of half-term and everyone is on holiday and having a good time.”

Other events during the two-week festival included a pop-up Japanese rock garden at King’s Arms Barn in Henley and a “Poems and Prosecco” event in Hambleden.

On Saturday, about 40 people attended an open day at Dunsden community orchard, which has historic varieties of apple, pears and plums. Guests were taken on tours and cream teas were served.

Organiser David Woodward said: “It was a really lovely occasion. Everyone who was there thoroughly enjoyed it and it was a great community-building experience.”