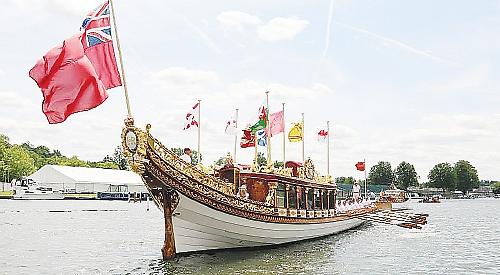 MORE than 200 craft including the royal row barge Gloriana will participate in this year’s Thames Traditional Boat Festival in Henley.

Organisers are hoping for a record crowd at the 38th annual event, which will take place at Fawley Meadows, off Marlow Road, from Friday to Sunday, July 14 to 16.

A wide range of vessels will be on display, from coracles and canoes to military and amphibious models, a Victorian steam cruiser, a flotilla of Dunkirk Little Ships and the only remaining torpedo boat from the First World War.

There will also be an exhibition of vintage and classic cars and motorbikes and fly-pasts by the Battle of Britain Memorial Flight, which this year will include an American Douglas C-47 “Dakota” transport plane, and biplanes and triplanes from the Great War Display Team.

Gloriana, which was built to celebrate the Queen’s Diamond Jubilee in 2012, will be the centrepiece of the festival. It is returning for the third consecutive year and for the first time will be offering river cruises on all three days.

Tickets for the trips are limited but will not be sold in advance to ensure all guests have a chance to buy one.

Other attractions will include market stalls selling nautical goods and river-themed clothing and gifts as well as a range of “pop-up” restaurants and bars.

Luscombe’s at the Golden Ball in Lower Assendon will be serving fish and chips and other meals while the Time For Tea mobile vintage café, which is based in Henley, will sell cakes and hot drinks.

The festival has also launched a supporters’ club and members will be able to socialise on a dedicated lawn with its own bar and “posh loos”. The club’s inaugural party will be held on board Gloriana, where river operator Hobbs of Henley will be serving its new Mr Hobbs gin.

Hobbs will also operate a free river shuttle service from the town centre to the festival site and back for ticket holders.

Henley musician John Read, who performed last year, will be back on the Saturday night with his band The Covered while former BBC Radio 1 and BBC Berkshire presenter Mike Read, of Mill Lane, Henley, will be broadcasting during the day.

There will also be parties on the Friday and Sunday nights and performances by local artists including a 25-strong barbershop harmony group.

The festival used to be known as the Thames Traditional Boat Rally until 2014, when it was called off due to flooding on the meadow at the start of that year.

It was revived under its current name in 2015 by a new organising committee led by Lady McAlpine, of Fawley Hill. It drew 10,000 visitors that year and more than 15,000 last summer.

Lady McAlpine said: “Preparations are going well despite a much-diminished committee, which means we’re individually doing three times as much work and at this stage we’re still hoping to get a few more trade stands.

“I’m also having talks with a number of local venues and events to organise something a bit quirky and add to the festival spirit.

“We haven’t confirmed anything yet but it would be nice to bring lots of Henley institutions together and create something that everyone can join in with.

“There will also be lots for children to do as there will be storytelling sessions, a Punch and Judy show, a blank mural which they will be encouraged to decorate across all three days and a fancy dress competition with prizes on the Sunday.”

Three-day tickets cost £26 for adults and £12 for chidlren aged 13 to 17 (under-12s go free). A limited number of camping and caravan pitches are available and there is also a luxury “glamping” option.