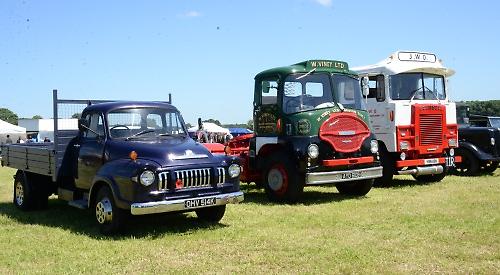 The event was held over two days in a field in Whitchurch Hill belonging to Richard Hazell, the owner of the neighbouring Sun Inn.

Almost 400 classic and vintage vehicles were on display, including steam and stationary engines, tractors, vans and lorries, cars, motorcycles and military vehicles.

New attractions included a display of 70 timber vehicles which performed cutting and loading displays in the main arena.

The craft marquee was enlarged and there were 40 trade stalls as well as food stands, a dance stage with live music and a beer tent.

The Battle of Britain Memorial Flight performed a flypast.

A share of the proceeds went to the Sue Ryder hospice at Nettlebed, whose volunteers held bucket collections. The rally, now in its 36th year, used to be held at Stoke Row until it outgrew its old site and moved first to Ipsden and then Whitchurch Hill in 2013.

Organiser Tony Waistell said: “It was very popular this year and one of the best shows we’ve ever had. The hot weather brought loads of people out and at its busiest the crowds were three-deep around the main arena.

“From the feedback I’ve received, people have been saying it was the show to go to this summer, which is obviously great to hear.

“We don’t know the exact figures yet but it was coming up to 5,000 visitors on each day.

“Everyone on the committee did a great job. We’re all pretty tired now but it’s a great community event and always worth the effort.”

Next year’s rally will take place on Saturday and Sunday, June 9 and 10.