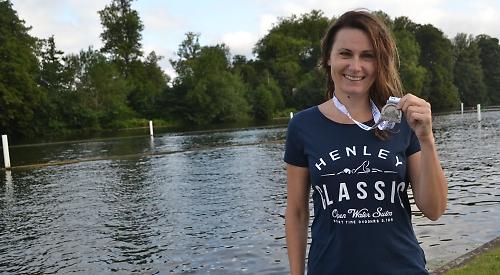 A TEENAGE boy from Peppard won the junior category in this year’s Henley Classic swim.

More than 600 people took part in the 2.1km swim upstream along the Henley Royal Regatta course, starting at daybreak on Sunday.

Henry Bell, 17, finished in 27 minutes and 38 seconds to win his category and came fifth overall.

The race also has elite, masters and open categories as well as a traditional section where competitors don’t wear wetsuits.

Henry, who lives in Blounts Court Road with his parents Robert and Rebecca, finished runner-up in the junior section last year and and was third in 2015.

He said: “I’m pleased to have won and it’s a bit of a relief to be honest. I was four minutes faster than my previous personal best.” The overall race winner was Andrew Horsfall-Turner for the second year running.

He finished in 26 minutes and 17 seconds, more than a minute ahead of second placed James Gill.

The fastest woman was Lili May Smith, who finished in 29 minutes and 45 seconds, just one second ahead of Jenn Read. Justine Small, of Lambridge Wood Road, Henley, took part in the event for the first time.

She raised at least £550 for Badgemore Primary School, which her five-year-old daughter Ava attends.

Mrs Small said: “My daughter has just started as part of the netball club, which is run by two parents, and they needed some posts, so I wanted to raise some money for that and anything left over will go towards equipment for the school.

“Getting up at 2.30am is quite a brutal part of the race, to be honest. Then you’ve got to make sure you’ve had enough water and food before you start at around 4.45am.

“The event is well-organised and people are really friendly.”

She said: “I thought I would take a bit longer than that so I was really pleased. It’s the first time I have swum outside and for that distance in one set. It’s totally different from swimming in the pool.

“When you first get in the water your chest constricts but the water was quite warm so that helped.

“I hope to enter again next year when hopefully I will be a stronger swimmer.” Organiser Jeremy Laming, who founded the event with Tom Kean more than 10 years ago, said the river conditions were excellent.

Mr Laming, from Sonning Common, said: “It was the highest quality of water we have ever tested on the Thames. It meant we had some really good times.

“The water temperature was 21C, so we had a lot of people swimming without wetsuits.

“The event was completely safe. We only had one extraction, which involved a woman who had suffered an asthma attack.

“It was dealt with very well by the team and she was very complimentary about the safety team.”

A new addition to this year’s event was an inter-schools challenge cup.

This team competition was won by Churcher’s College in Petersfield, who beat Harrow, Radley, Charterhouse and Taunton.

Mr Laming said: “It went very well. We’ve had really good feedback from the masters who said they would definitely come back next year.”

The Henley Classic is the first of four events in the Henley Swim series.

The next event is the Henley Mile on Monday, July 10 when participants will race downstream along the regatta course.