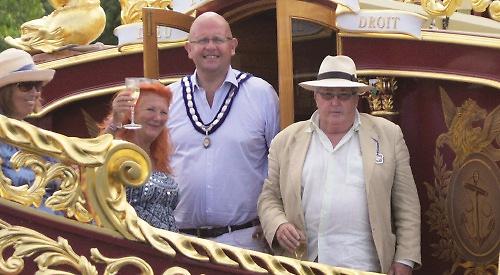 HERE’S your chance to spend a weekend at this year’s annual Thames Traditional Boat Festival in Henley with your family — absolutely free.

The Henley Standard has teamed up with organisers of the 38th annual festival to offer this prize, which is worth more than £100.

More than 200 craft, including the royal row barge Gloriana, will be at the event, which will take place at Fawley Meadows, off Marlow Road, from Friday to Sunday, July 14 to 16.

These will range from coracles and canoes to military and amphibious models, a Victorian steam cruiser, a flotilla of Dunkirk Little Ships and a torpedo boat.

Classic and vintage cars, motorbikes and bicycles will also be on display and there will be fly-pasts by the Battle of Britain Memorial Flight, which this year will include an American Douglas C-47 “Dakota” transport plane, and biplanes and triplanes from the Great War Display Team. For the first time this year, there will be a private members’ enclosure for supporters of the event with its own bar and catering, a concierge service, private toilets and a launch party on board Gloriana.

Guests will be served Mr Hobbs gin, a drink launched earlier this year by river operator Hobbs of Henley. On land, boat-builders will be demonstrating their skills and there will be jewellery making as well as stalls selling vintage clothing and accessories, hats, children’s goods and second-hand wares.

The traders will include
silversmith Bucci, Toad Hall garden centre in Henley and Louise Claire Millinery, of Wallingford.

Interior design firm Farrow & Ball, which has a branch in Thames Side, Henley, is organising a mural which people can add their own graffiti to throughout the weekend. There will be an exhibition of artwork by Rowland Emett, a cartoonist who designed the famous flying car for the 1968 film Chitty Chitty Bang Bang and the “breakfast machine” that appears in the opening scene.

Musicians will perform live at the festival bar and there will be a Punch and Judy show, a flea circus, two double-decker “bus bars” serving champagne and cocktails and ice-cream vans.

The Golden Ball pub in Lower Assendon will be serving fish and chips and there will be stalls selling local lamb, pulled pork, vegetarian food, sausages, coffee, baguettes, pizzas, milk- shakes and more.

There will be a competition encouraging children to find out more about the boats as well as photography and art contests for adults.

The Kenton Theatre in Henley is sponsoring a competitition for the man and woman whose attire best reflects the era of the boats on display and Henley luxury watchmaker Bremont is offering a personalised watch for the best boat overall.

There will also be a fun charity dog show judged by Erik D’Arcy-Donnelly, of the Henley Veterinary Centre, Linda Vintcent, of Wagtastic Dog Grooming in Nettlebed, and royal biographer Ingrid Seward, who is editor-in-chief of Majesty magazine.

There will be a special fancy dress class for “nautical dogs and piratical owners” while the supreme champion will win a portrait by Henley artist Clive Hemsley and a pampering groom from Wagtastic. Prizes will be presented at 5pm on the Sunday.

The prize of a weekend family ticket, includes lunch at the Golden Ball stand on Lower Meadow. All you have to do to be in with a chance of winning is answer the question below and send it, together with your name, address and daytime phone number, to: Trad Fest competition, Henley Standard, Caxton House, Station Road, Henley, RG9 1AD.

The winner will be the sender of the first correct entry to be selected at random after the closing date of Wednesday, July 12 and will be notified by phone.

Whose gin will be served for the first time at the festival?

The prize is non-transferable and there is no cash alternative.

Entries received after the closing date will not be considered.

To see the rules, visit www.henleystandard.co.uk/regulars/competition_rules.php