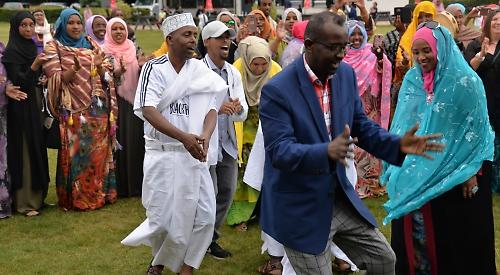 HUNDREDS of people attended a party to celebrate Henley’s friendship link with the Somalian city of Borama.

Natives of the city, which is the largest city in the African nation’s north-western Awdal region, including many who now live in the UK, travelled to Henley to give a demonstration of their culture at the third “Borama Comes to Henley” event in Mill Meadows on Saturday.

Many of the guests wore colourful traditional African dress, while others donned T-shirts which read: “Borama Comes to Henley”. They included Suldan Mahdi Abdi, a traditional leader, and other dignitaries from the city.

The event began with introductory speeches from Henley Mayor Kellie Hinton and Habiba Ali, a Borama native who is now a city councillor in Helsinki, Finland.

The displays of singing, dancing and drumming had been organised by Samasonic Relief, a charity which channels funds from the UK for welfare projects in Borama. The charity is currently collecting books for a new public library in the city.

There was also a talk about the history of the friendship link from Brigadier Malcolm Page, who lives in Ancastle Green, Henley, and founded the Henley Borama Friendship Association in 1983.

Hobbs of Henley also took a small group on a ferry to the Thames Traditional Boat Festival in nearby Fawley Meadows for an hour, where they got to see the Queen’s royal barge Gloriana. Brig Page said: “I was pleased, although the weather was not ideal and as a result some of the ladies decided not come and skip around in their colourful dress.

“I was delighted with the participation of our mayor and the deputy mayor of Borama, as well as the traditional leader, who now lives in Bristol. The big new factor is the number of people from Borama who now live in the UK, which gives us a contact we’ve not had in many years.

Cllr Hinton, who told guests that she was hoping a return visit to Borama could be organised in the next few years, added: “It was a really successful event. It’s all about unity between the two towns and strengthening that to carry on in to the future.

“It would be great if we could get a group of people to go over to Borama but that’s really difficult to organise.

“This year the link is stronger than ever before but it needs to continue. We have really good links with our three other twin towns and we need new people to get involved.”

The first Borama Comes to Henley event was held in Market Place in 2014 and it was repeated last year.

Borama is on the western boundary of the former British protectorate of Somaliland, now the unofficial republic of Somaliland.