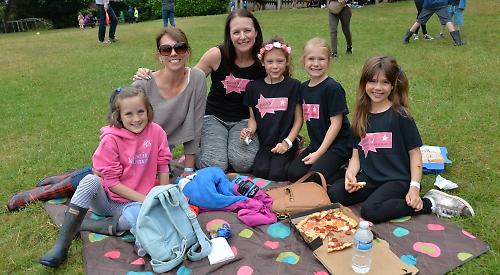 RAIN failed to dampen the spirits of people attending a new music festival at a Henley primary school.

TrinStock took place at Trinity School in Vicarage Road and featured eight acts who performed on a stage on the school field.

The festival was opened by DJ Dave Holland and dancers from Steph’s Divas and Dudes, run by Steph Maxwell, before The September Sessions, a band comprising parents, played the first set.

There were also musicians who had previously played at Acoustics@Magoos and Music on the Meadows.

Other attractions included face-painting, a barbecue, bar, ice cream and games such as “human Hungry Hippos” and a plastic archery range.

The afternoon event, named after the famous Woodstock music festival in New York in 1969, was to celebrate the end of the school year and was organised by the Friends of Trinity School.

Friend Adam Holden, the bassist for The September Sessions whose two daughters attend the school, said: “We had a full music programme also featuring Dolly and the Dinosaur, Lonely Ocean, JC4Me and DIRT., many of whom are local bands. Each played a half-hour set and all received fantastic feedback from the visitors.

“We had a barbecue and bar provided by parents, pizzas by the Little Reds pizza company and games and beauty stalls manned by parent volunteers. The children were entertained all afternoon and, despite an early shower or two, the festival was full pretty much right up until the end.

“We had fantastic support from Henley Theatre Services, who supplied and managed the stage and audio equipment, Eight Ray Music, who supplied the DJ and helped us build relationships with acts, Georgia Michel from Acoustic@Magoos, Starbucks, Brakspear, Rebellion and AFC Henley.

“Music is an important part of my life, and other Trinity parents too, and we have strong participation in music from the children at events like the Henley Youth Festival and with Henley Music School, so it seemed an appropriate evolution for the fete.

“Following the main Henley Festival, which young children can only enjoy on Sundays, and being around the time of the Glastonbury and other festivals, I wanted our children to have something that was truly theirs.

“It was great to see the children enjoying themselves as well as listening to some fantastic live music all afternoon.

“I came up with the name TrinStock and its logo and we’re hoping that this ‘brand’ can help develop the event going forwards.”