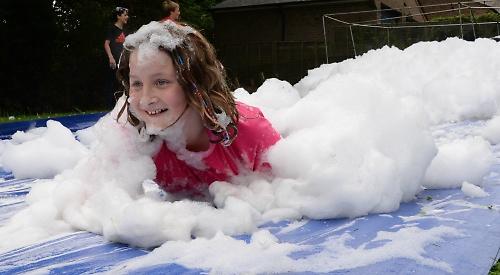 THE Henley Outdoor Play Scheme has enjoyed one of its most successful years to date.

All 250 places were sold out on one day and the venue was almost at capacity during the others.

Children’s attractions including swing seats, a teacup roundabout, an inflatable assault course, a bouncy castle and a foam slide were set up on the field behind the school.

Staff from Premier Sport, of Henley, offered a range of activities from archery to football and instructors from Henley leisure centre gave squash lessons.

There was also an exotic animal “petting zoo” where children could feed and handle creatures such fruit bats and pythons.

The scheme, which has been running for more than 40 years, was under threat of closure last year due to a shortage of volunteers but is now thriving.

Chairwoman Emma Taylor said: “We mostly bring back the same activities every year because we know they work and children enjoy them but we’ve also introduced a few new activities to keep it varied.

“It has been a fabulous year and one of the best-attended that I can remember. We had people queuing up to find out whether anyone had dropped out so that their children could get in.

“It’s always fun but there’s been a particular buzz around this year’s scheme and, as always, the children have been wonderful.”