Children and prisoners among exhibitors at village art show 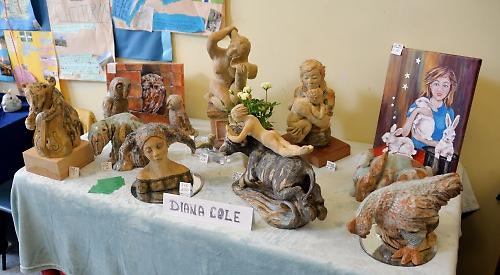 CHILDREN from Nettlebed Community School were among the exhibitors at the village’s annual art and craft show.

The two-day event, organised by the Nettlebed Art Society, featured more than 130 paintings by dozens of contributors from within 20 miles of the village.

There were also craft pieces, ceramics, jewellery and photography.

The paintings included a wall of self-portraits drawn by members of the school’s art club and works by inmates at HMP Huntercombe in Nuffield sitting a City and Guilds course. Many were for sale with the proceeds from the prisoners’ efforts going to the Sue Ryder hospice in the village.

Visitors were asked to vote for their favourite piece and the winner was a painting of Holland Park in London by Peter Lister, from Oxford.

The show was held in the school hall off High Street and was opened by artist Jo Harris, who runs the Henley School of Art.

She said: “This is an amazing and varied exhibition that shows off a huge amount of talent. It makes me very proud to think there’s so much talent in this area and I was delighted to be invited.”

The proceeds will be divided between a number of charities including Sue Ryder and the Staying Alive Foundation, an anti-HIV initiative. The school will also receive a share to go towards a new roof. Susan Byers, the society’s treasurer, said: “Attendance was pretty good and the standard of entries was high, as always. We had quite a few new artists entering this year, which was lovely to see.”

The show, which has been running for about 65 years, was founded by villager Olive Ollivant, the mother of naval officer and Second World War hero Captain Martin Ollivant. Capt Ollivant’s widow Mary still lives in Nettlebed and visits every year.