Jam in the skate park 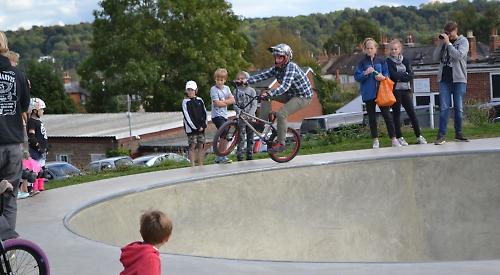 Dozens of people attended the event at the new facility in Makins recreation ground on Saturday.

The £290,000 skate park, which was designed by Maverick Industries of Dorset, has sunken obstacles rather than hollow metal ones, which reduces noise, and caters for BMX bikers, skateboarders and roller-skaters.

There was music and a barbecue and compere Richie “Geordie” Inskip introduced many of the professionals and commentated while they performed their routines, including backflips.

Craig Johnston, who grew up in Henley and now lives in Benson, performed some tricks on his BMX.

He said: “The new park is good. I really like it and it’s good fun. I’ve been BMXing for 15 or 16 years but I haven’t really done any in two years. I started again because of this park.”

Mr Inskip also took seven-year-old Ben Sleet, who has spina bifida and is paralysed below the knees, on a ride on his skateboard.

Ben, who lives in Gainsborough Hill and goes to Valley Road Primary School, said: “It was so awesome! It was the best thing ever. My favourite part was when I was in the bowl.” Visitors had come from as far as Brighton, while many parents brought picnics to enjoy while watching their children enjoy themselves.

Some of the skaters were as young as three, while toddlers rode smaller bicycles on the flatter parts of the park.

Colin Brathwaite, chairman of the Initiative, said: “It was a really fabulous day — you could see that by the turnout and everyone was having a good time.

“There was a real sense of community and it goes to show what we were talking about all along: this is a fabulous thing for Henley. It’s been extremely busy since it opened but that was never in doubt. We knew that if we designed it well to suit all ages then it would be a success.”

Mayor Kellie Hinton said: “I’m trying not to get emotional like I did on the first day we opened the park.

“I’m really proud to see everyone here and I hope it gets even busier.

“This skate park is down to the hard work over six years of the Henley Skatepark Initiative and especially Colin Brathwaite, who ignores the attention but deserves applause.

“People have told me they have come from far and wide to use this park and local people say it has changed their lives. Thank you also to the people who opposed us because every obstacle you have put before the initiative we have challenged and won. It made it so much more worth it.”

Russ Holbert, a director at Maverick, said: “It’s great to see so many people using it. It’s a mixture of street and bowl and what’s really important is to have a space like this which is busy seven days a week.

“The youngsters have got somewhere to go which is not on the street so they are staying safe. They can get together on this space, have fun and stay fit.”

The skate park was paid for with a £100,000 grant from South Oxfordshire District Council, £75,000 from both the town council and Sport England and £20,000 from the Thamesfield Youth Association plus £6,000 raised by the Initiative.

The association also anonymously loaned another £22,000 so the work could begin and the Initiative is now raising the money to repay this. There were bucket collections on Saturday.

Gill Dodds, a trustee of the association, said: “We are thrilled that the skate park has proved so popular with the young people of the town.

“We are asking those who enjoy the skate park, their family and friends, to help with the fund-raising to repay the trustees the £22,000.”

You can make a donation via Paypal at www.henleyskatepark.org