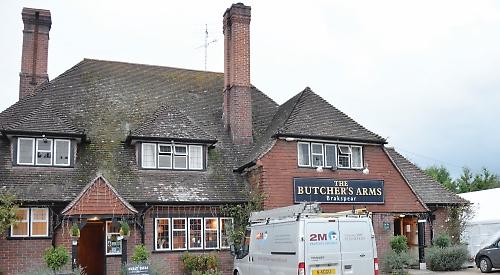 A PUB landlord is hosting a beer and music festival as a tribute to his late wife.

Rob Blues, who runs the Butcher’s Arms in Blounts Court Road, Sonning Common, has organised the Big Bash with the help of regulars in memory of Ellie Gallagher Blues, who died of cancer in July, aged 46.

He said he wants everyone who comes to enjoy themselves, adding: “The biggest thing everyone remembers about Ellie is her smile.”

Tomorrow’s event is in aid of Sue Ryder and Beating Bowel Cancer and the organisers hope it will became an annual event.

Then in 2014 Mrs Blues was diagnosed with liver cancer, which gradually spread despite her having surgery and chemotherapy.

She died in her native Ireland after spending her final weeks with her husband, friends and family.

Mr Blues, 50, said: “We did more together than most people get a chance to do in a lifetime.

“We travelled the world and had our fairytale wedding in a castle in Scotland.”

The couple first met in 2004 when they were both working for Tesco in Ireland and their paths would regularly cross at meetings or on training courses.

Mr Blues had been working for the company since he was 17, beginning at its Weybridge distribution centre and then climbing his way up the ladder.

When he met Ellie, he was a distribution manager in Ireland and she was a buying manager in the health and beauty section in the head office in Dublin.

They lived near each other in Malahide in the Irish capital and became an item in 2007.

“We got on really, really well,” said Mr Blues. “We had three years of crossing paths and it was just one of those funny things that happened but I think there was drink involved!”

In 2009 Mr Blues was offered redundancy and Ellie asked to be let go too and the couple moved to England.

“Moving back to the UK was great — we both loved it,” said Mr Blues. “Ellie had grown up in Ireland but lived in the UK for years before moving back to Ireland.”

He took a job running a golf club in Northamptonshire for a year to help a friend while his wife went for interviews for jobs in London. Mr Blues said: “She had been approached by companies like Disney and Argos and was going to get another executive job but when I picked her up after the final interview she told me she didn’t want to do it again.

“We decided we would run our own business and decided to take a pub on.”

The couple spent 2011 travelling, and visited Malaysia, Cambodia, and Hong Kong as well as spending a lot of time in Australia, where Mrs Blues has family.

When they return to Britain they began looking for pubs in the South-East and chose the Butcher’s Arms, a Brakspear pub which had closed.

Mr Blues said: “At that point we didn’t know about the reputation it had. We spent five weeks sorting it out and worked with Brakspear so it was possible for us to do it.

“I did front of house and Ellie did the back, sorting out the books and then she would help me in the bar when it was busy.

“We had no staff to begin with so we did the shifts ourselves.” Soon after moving in, the couple got their dog Sid, a schnauzer, and then Mr Blues proposed over Christmas 2012 while the couple were at Mrs Blues’s parents’ home in County Meath.

The wedding took place at Dalhousie Castle in Bonnyrigg on August 13, 2013 and was attended by 85 friends and family members.

Mr Blues recalled: “We went straight from the civic service to a big sitdown meal and then into the state ballroom to dance the night away.”

After spending their honeymoon in St Andrews, the new Mr and Mrs Blues returned to the pub.

It wasn’t until August 2014 that disaster struck when Mrs Blues went for a routine check-up at Sonning Common Health Centre.

The doctor found a lump on her stomach so referred her to the Royal Berkshire Hospital in Reading where she was diagnosed with stage four bowel and liver cancer.

Mr Blues said: “Ellie had 10 tumours in her liver but her liver function had never suffered.”

Her cancer was originally considered to be inoperable but she responded well to chemotherapy and drug treatment, meaning she was able to have surgery to help prolong her life.

Mr Blues said: “She was only 43 when she was diagnosed. She kept working up until the start of this year, helping with jobs and keeping the business running.

“In total she had 28 rounds of chemotherapy. Ellie was very tolerant of the chemotherapy and that was why she had so much of it.”

Mrs Blues, who was treated with cetuximab, had surgery at the Basingstoke and North Hampshire Hospital in July 2015.

Her husband said: “The treatments had reduced the size of the tumours so Ellie eventually had a 10-hour operation to remove two-thirds of her liver.

“When she came round from the operation the first thing she was was ‘I’m still alive’!

“It all grew back perfectly and it was only the start of this year when she developed more tumours in her liver.”

Not long after her operation the couple enjoyed a day out at Newbury racecourse and spent the evening watching Madness perform there. They also bought a house in France and spent six weeks doing it up.

Mr Blues said: “Ellie didn’t want to miss out on anything going on in her life. She kept going and did not get really ill until the start of this year.”

The couple had hoped that she could have more surgery to remove the tumours from her bowel but the disease was found to have spread to her lungs.

Mr Blues said: “When you have an operation like that your body releases growth hormones and it triggered a new growth in Ellie’s lungs.

“It meant more chemotherapy and more drug treatment. She was good through all of it. If anyone saw her they did not think she was ill.”

Mrs Blues was put on to a new, more aggressive type of chemotherapy earlier this year but it caused her immune system to crash and she contracted sepsis.

In March she was admitted to the Royal Berks and was treated for the infection. Eventually she was transferred to the Sue Ryder hospice in Nettlebed.

Mr Blues said: “They looked after her for a couple of weeks but Ellie always wanted to go home to Ireland for the last part of her life.

“They got her well enough to be able to go so we flew to Ireland in April with her sisters. I drove over a few days later with Sid.”

Mrs Blues was given a few weeks to live when they arrived in Ireland but she managed to do lots of things with her friends, family and husband.

She was admitted to the St Francis Hospice in Raheny, near Dublin, on July 18 where she stayed until she passed away at 1am on July 30.

“Ellie was comfortable and that was the main thing,” Mr Blues said.

Friends and family from the UK attended the funeral in Ireland three days later.

The service included music on the accordion by one of Mrs Blues’s uncles and dancing by one of her nieces.

On the same day a wake was held at the pub in Sonning Common, overseen by Billy McDonald and Karen Earle, who were running the business in Mr Blues’s absence.

Now he is running the pub on his own but he hopes to sign another five-year lease when his tenancy comes up for renewal in February.

Mr Blues said: “Brakspear want me to stay and that would be 11 years in the village. I think we’re the longest-serving tenants this pub has had in a long, long time.”

He has other business interests in the area, including being licensee of a pub in central Reading and being involved with the White Lion in Crays Pond.

Members of Mrs Blues’s family in Ireland are coming for this weekend’s event.

Two large marquees have been erected in the pub’s newly redsigned garden in case it rains.

Bands will perform, including pub regulars The Echo, Better than Life, The Electric Colts, Lucy Day and Maya Rees, Pure Fluke and Who is Smith.

Johnson Matthey has allowed its car park to be used to provide extra parking spaces.

The Big Bash will run from 2pm to 1am and all are welcome. Food and drink will be available.

Mr Blues thanked regulars Andy Howton and Graham Field, who have helped him to organise the festival.