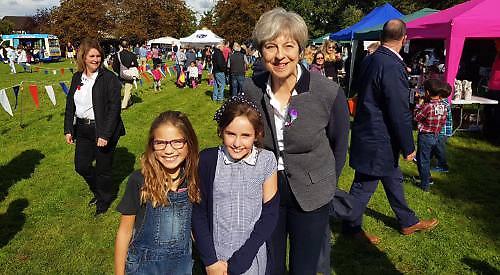 PRIME MINISTER Theresa May was an unexpected guest at the annual Sonning Show.

The Maidenhead MP, who has a home in the village, attended the event on Saturday, September 16 to the surprise of organisers, who were not told she would turn up.

The show at Sonning Primary School featured Maypole dancing, a tug of war and a climbing wall, while scouts from the village manned the barbecue.

There were also stalls offering fairground games or selling arts and crafts and produce such as fruit, jams and cakes, with the leftovers auctioned off at the end of the show.

The event finished with an evening at The Sonning Club, featuring live music. The show was raising money for the school and local community groups.

Organiser Carole Collier said: “The adult art and craft classes brought in a lot of entries as did the flower arrangements and in the children’s section there were plenty of pictures of the Prime Minister hand-drawn by the local children.

“Both the climbing wall and Reading Blue Coat School brass quintet were a successful addition to the afternoon’s entertainment.

“There were plenty of cups of tea and cake consumed in the afternoon which was provided by members of Sonning Glebe WI.

“Most of all the show committee would like to thank Sonning School and all the village organisations for their continued support.”