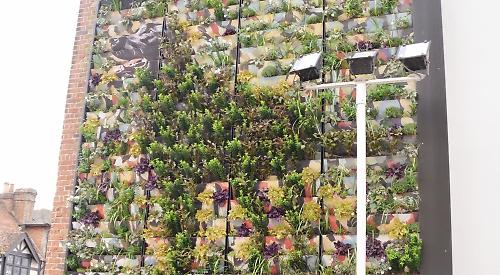 AN artist has installed a 30ft “living” wall featuring one of his portraits of a dog on the side of his home in Henley.

Clive Hemsley has covered the east-facing wall of Longlands House, a three-storey Georgian property in Hart Street, with shrubs and flowers that absorb and digest pollutants from exhaust fumes.

The black plastic frame which holds the plants has been covered in an enlarged version of his painting of Jenson, a black Labrador belonging to David and Emma Mole, from Shiplake.

The troughs have then been filled with different coloured plants, including heuchera, heucherella, liriope, vinca and sedum which follow the outlines of his artwork. Sage, thyme and strawberries have been planted along the bottom rung so that it will smell attractive to passers-by. The system was installed by Treebox, of Wimbledon. It is self-watering and is supplied by a rain water butt on the roof of the property, drawing from the mains only when this is empty.

It is one of the most efficient systems of its kind as it only uses about 20 litres a day. Any run-off will be diverted to the window boxes outside the ground floor of the property.

Mr Hemsley, who has lived at the Grade II-listed with his wife Inez for 20 years, came up with the idea last year following talks with Eco Henley, a pressure group that is part of Henley in Transition. The group says green walls are needed in the town centre as levels of nitrogen dioxide are more than 50 per cent above the recommended safe limit in some streets.

There are also high levels of fine particulate matter, a type of soot which is similarly damaging.

Mr Hemsley said: “This is a great step forward in improving the town’s environment and we could do with more of them.

“We also need more trees in the town centre but unfortunately that’s out of my hands as I might get into trouble for digging up the pavement!

“I’m looking forward to seeing the wall in the spring, when everything is in full bloom. I think it’s going to look wonderful and I love the fact that there are herbs along the bottom. The response has been very encouraging so far. People seem to really like the idea and have been saying very positive things about it.

“It’s not just a green feature but a work of art and I think it makes much better use of that wall, which used to be bare and was such a wasted space.”

Armando Raish, director of Treebox, said: “This uses the latest technology and is the first of its kind to use a piece of artwork in this manner. It took us about five days to install and we really enjoyed the creative challenge as it was something a bit different. Hopefully, other locations will be found for these in Henley.”

Mayor Kellie Hinton, who chairs Henley in Bloom, said: “We’re proud to have something so innovative in Henley as it is beautiful and has real potential to help improve the air quality.

“Well done to Clive for his forward-thinking approach and also to Eco Henley for getting the conversation started and encouraging him to pursue it.

“The finished result looks fantastic and it’s very typically Clive. It’s a bit different but it fits in beautifully at the entrance to the town centre.”

Eco Henley believes two other living walls of a similar size are needed, including one at the crossroads of Duke Street, Friday Street, Reading Road and Greys Road, which is a pollution hot spot.

If suitable locations can’t be found, businesses could be asked to have window boxes containing air-cleaning plants.

Val Stoner, of Henley in Transition, said: “This is a dream come true for us. Henley is known all over the world as a beautiful town and this should point the way for other people to follow.”

In 2015, a £3,000 living wall was installed at Leichlingen pavilion in Mill Meadows as part of Henley’s Britain in Bloom entry.