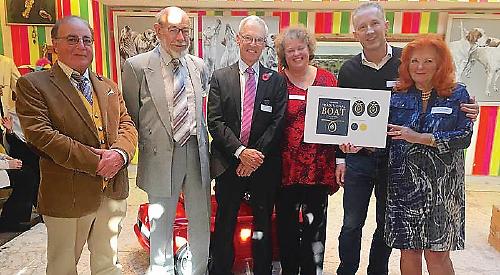 THE Thames Traditional Boat Festival has been rebranded.

The event, which is held at Fawley Meadows in Henley every summer, has a new logo which the organisers says it is more elegant and traditional than the previous branding.

They want the “Trad” to be reconised as being as important to Henley and the surrounding area as the royal regatta and the festival.

The new look was launched at a lunch party at the Fawley Hill home of Lady McAlpine, who co-chairs the “Trad”, that doubled as a thank-you to sponsors, members and supporters of the festival.

The logo was designed by Strength and Honour, a Marlow advertising agency owned by Clive Hemsley, of Hart Street, Henley.

Lady McAlpine said it was very well received by the 100 guests present and that she and her co-chairman Adam Toop were now eager to start marketing and drumming up support for next year’s event. She said: “It is as an important event in the boating world as Henley Royal Regatta. It is not a sporting event, it is about the history of the river in Britain, it is about conservation and people using boats and enjoying them.

“While the regatta is about rowing and is a very expensive event, we are about expensive boats but people can get close to them, go on them and enjoy them. It is a festival of boating but there is something for everyone. It is a family event.

“The Trad is so important because it is the biggest collection of traditional river craft anywhere in the world and could get bigger if we can find more riverbank space.”

Lady McAlpine said the committee had been in talks with the River & Rowing Museum about working more closely together, which could involve moving the event to Mill Meadows.

She said: “There are options but either way we do feel that the Trad is such a significant event which people from all over the world come to.”

Among the sponsors at the lunch were directors of Shanly Homes, who have supported the event for many years, and newer supporters including Grundon, Bremont Watches, the Rug Company and Kreos Capital. Lady McAlpine said the event produced several new sponsors and promises of support.

Event patron Sir Steve Redgrave was unable to attend but has assured the committee that he will continue to support the event in 2018.

Next year's festival will take place from July 20 to 22.