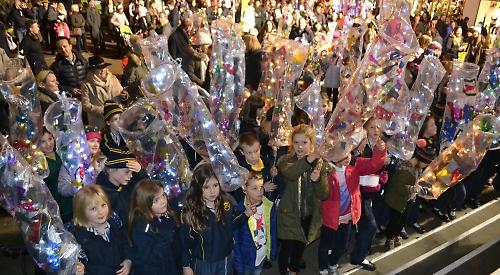 SPECTATORS are being encouraged to watch this year's Children's lantern parade.

It will leave the River & Rowing Museum tomorrow (Friday) at 5pm and make its way along Riverside, Thames Side and New Street, ending at the Kenton Theatre.

Farrow and Ball in Thames Side are inviting children in to have gingerbread and will be staying open later than usual while the neighbouring Spice Merchant will be presenting the children with a gift.

The procession will cross New Street outside Hotel Du Vin safely, assisted by the hotel's staff and Tesco’s Elves.

They will then be greeted at the theatre by Mayor Kellie Hinton and the charaaters in this year's pantimine, Robin Hood. Inside there will be face painting and Mr Toad will be there from the River & Rowing Museum.

Members of the Henley Amateur Operatic and Dramatic Society will singing carols there at 5.30pm and 6.30pm and mulled wine will be served.

Meanwhile, town centre roads will be closed from 3pm until 10pm - an hour earlier than had been previously advertised, due to health and safety.

Signs had been placed on the roadside last week warning road closures from 4pm but they were changed on Monday.

Paul Price-Davies, event and project manager at Henley Town Council, said: "We have a new layout this year so we wanted to give ourselves more time to carry out the health and safty checks to make sure we have eveything tightly controlled.

"Hart Street has previously been closed from 3pm for a couple of years but this year we have decided to get everyone in and have a clean sweep of the site."