Carol concert in aid of Nomad 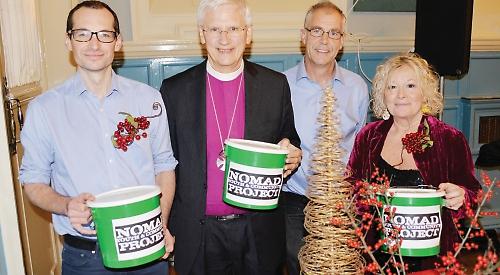 A CHOIR of pupils from Trinity Primary School in Henley led a carol service at the town hall.

More than 100 people including Mayor Kellie Hinton attended the event, which was organised by the Filling Station in aid of Henley youth and community project Nomad.

They were welcomed by the Rt Rev Colin Fletcher, the Bishop of Dorchester, who delivered a Christmas message.

Sam Brewster, a former curate at St Mary’s church in Maidenhead, gave a talk entitled “What are you hoping for this Christmas?”

Mince pies, chocolates and drinks were provided by Tesco, Waitrose and the Compassionate Loaf, a baking group based at Peppard Congregational Church, while after the service the children were treated to pizza donated by Pizza Express in Market Place.

Maggie Atkinson, a leader at the Filling Station, said: “It was a wonderful evening. It was fabulous to celebrate Jesus’ birth with such strong community spirit.

“We’re really grateful to all the businesses which donated and to the children for taking part. The choir was the absolute highlight and their parents were so proud to watch them performing.”

Councillor Hinton, whose seven-year-old daughter Hallie was part of the choir, said: “I was stunned because the children only started practising a few weeks into the new school year but they were harmonising and generally singing at a very high standard. All credit must go to their teacher Pete Moody.”

Clockwise from top, some of the children singing, the Mayor and Sam Brewster, Rt Rev Colin Fletcher, and co-organisers Mark Sayers and Maggie Atkinson