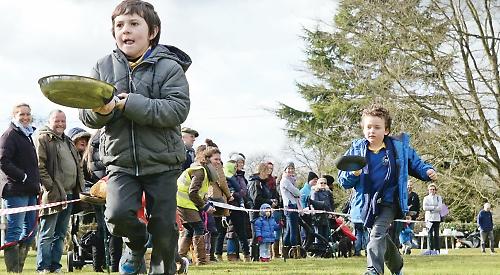 AFTER coming last in the staff race at her school’s traditional pancake races last year, headteacher Charlotte Harris had to do better.

But she surpassed even her own expectations when she won this year’s race comfortably.

She was one of dozens of pupils, staff and parents from Stoke Row Primary School who took part in the annual races on the village green on Tuesday.

The fun event was organised by the school and its friends group as well as members of Stoke Row Independent Chapel.

Each year group was split into teams of girls and boys who had to sprint along a short course while carrying a frying pan and a pancake which they had to flip once at the start and again at the halfway point.

There were separate races for mums and dads and another for parents running alongside their pre-school aged children.

Entrants were cheered on by a group of parents and villagers who took pictures and filmed the action on the phones. Afterwards, every child was given a pancake with a choice of toppings while the winner of each race received a small bag of chocolate buttons.

Volunteers from the chapel served hot drinks and opened up their kitchen for parents to use.

They also set up a small display on the green with facts about the tradition of eating pancakes on Shrove Tuesday, which fell during last week’s half-term holiday. The event has been running for more than 30 years and was started by villager Judy Fox, who still organises it with her friend Tilly Smith.

She said: “It went brilliantly and I’m pleased to say the number of supporters seemed much greater than usual, which made it all the more fun.”

Miss Harris said: “It went really well this year. The children really enjoyed it as always and I’m especially pleased because I won! It’s really lovely to get outdoors and spend an afternoon in the local community.”

To view the full gallery of photos, please click here