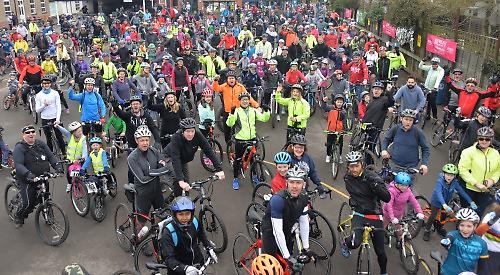 HUNDREDS of cyclists took part in the 12th annual On Your Bike challenge, which raised at least £3,000 for charity.

They set off from the playground at Sonning Common Primary School yesterday and rode either six, 12 or 20 miles around the South Oxfordshire countryside.

Click here to view our picture gallery of the day.

The routes were signposted with marshals along the way and there was a supervised “feed station” with water, fruit and biscuits near Hook End.

The first cyclists to return were Jonathan Westlake, of Emmer Green, and his son Henry, six, who attends Sonning Common Primary School, followed by Vicky Mollison, of Leigh Road in Sonning Common, and her son Max, eight.

The youngest rider to complete the 20-mile route was Sonning Common Primary School pupil Oscar Nash, six, while Shiplake College students Jack Murray and Kesha Sarkytbayev, both 15, cycled it in one hour and 26 minutes.

Also taking part was Joshua Saker, 15, who has cerebral palsy and is recovering from surgery to improve mobility in his legs. He rode six miles, the furthest distance he has ever completed, accompanied by his parents Pam and Ian and brother Harry, 11.

All proceeds from the day will be shared between the primary school, the Sonning Common FISH volunteer service, Sonning Common first responders and the Sue Ryder hospice at Nettlebed, which was running a tombola and bric-a-brac stall.

Founder and organiser Penny Snowden said: "Money is still coming in from entry fees, sponsors and donations but the most important element is the community spirit, friendships and unbelievable achievements of everyone who takes part.

“At a time when being active has never been more important, we feel immensely proud to have organised another hugely successful ride.”

For the full story, pick up a copy of the Henley Standard on Friday.