Families get on bikes for charity 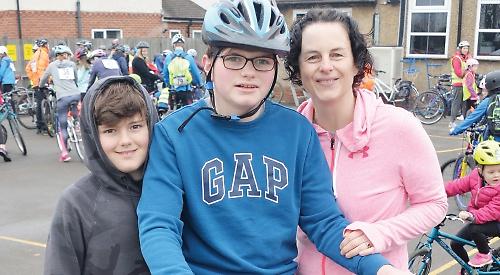 A DISABLED teenager who is recovering from major leg surgery rode the furthest distance of his life at the 12th annual On Your Bike event.

Click here to view our picture gallery of the day.

Joshua Saker, 15, was one of 469 people who took part in Sunday’s ride, which started and finished at Sonning Common Primary School and made at least £3,000 for charity.

Participants rode either six, 12 or 20 miles around the South Oxfordshire countryside while younger children completed laps of the school playground on tricycles and scooters.

Joshua, who lives in Grove Road, Sonning Common, with his parents Pam and Ian and brother Harry, 11, successfully completed the six-mile circuit, passing through Kidmore End, Gallowstree Common and Peppard.

Joshua, a pupil at Bishopswood Special School in Sonning Common, has cerebral palsy which affects his lower limbs and underwent a procedure to improve his mobility just over a year ago.

Surgeons at the John Radcliffe Hospital in Oxford broke his legs in several places and inserted metal plates in order to straighten them.

Joshua has being riding a specially adapted tricycle as part of his recovery but had never gone more than about three miles.

The whole family took part in Sunday’s challenge, with Mrs Saker running alongside Joshua and his father and brother accompanying them on scooters. They completed it in less than 90 minutes.

Mrs Saker said: “It was brilliant because he did it completely on his own. I was anticipating having to push him on the uphill sections but he didn’t need any help at all.

“He was so excited to be taking part and I think being involved in such a big event with lots of other people gave him the encouragement he needed to keep going. He has never been able to do that much cycling before.

“He really wanted to have a go because he used to take part in the children’s playground ride when he attended Sonning Common Primary School and he would ride behind us on a tagalong when we did On Your Bike in previous years. He was so proud to have finally done it for himself and didn’t even complain that his legs were hurting at the end.

“We were also so proud for him and I admit there were a few tears at the finish.

“He is very keen to keep this up. Halfway through, he turned to me and said, ‘I’m not sure I’m ready for the 20-mile ride yet’. I replied, ‘maybe you should get the 12-mile one under your belt first!’

“We usually get out on our bikes every week and now we’ll definitely be looking for other rides that he can take part in.”

Cyclists gathered on the school playground off Grove Road, where a public address system played cycling-themed songs including Bicycle Race by Queen.

They were given a safety briefing by Sonning Common parish councillor Tom Fort before being sent off in waves at 10.30am by event founder and organiser Penny Snowden and her team of volunteers.

The routes were signposted with marshals along the way and there was a supervised “feed station” with water, fruit and biscuits near Hook End.

The first cyclists to return were Jonathan Westlake and his son Henry, six, who attends Sonning Common Primary School.

The pair, from Emmer Green, were taking part for the first time and completed the six-mile route in about 50 minutes.

Henry said: “It was easy and fun. I ride my bike lots and I really like it because you get to go fast and look at the scenery. I’m really pleased to have finished first.”

Mr Westlake said: “Henry often cycles alongside me when I go out running, which is a good way for both of us to get out and be active.

“This is our first time but we’ll be back next year and will probably do the really long route. It’s a wonderful event — we were slightly apprehensive about the amount of traffic there might be but it wasn’t a problem at all and we really enjoyed it.”

Also among the early finishers were Vicky Mollison, of Leigh Road, Sonning Common, and her son Max, eight.

Mrs Mollison said: “There were a lot of potholes and we had to stop to fix the gears on my bike but we enjoyed it. It’s a lovely morning for children as it encourages them to get out and cycle on a safe route.”

Liv Taphouse, 14, and her brother Henry, nine, have taken part in On Your Bike a number of times.

Henry said: “It was very cool. It hurt my legs but it was still really fun. It’s a really good thing for charity and getting everyone together.”

The youngest rider to complete the 20-mile route was Sonning Common Primary School pupil Oscar Nash, six, while Shiplake College students Jack Murray and Kesha Sarkytbayev, both 15, finished it in one hour and 26 minutes.

Kesha said: “The huge hill halfway around the course was painful but we didn’t stop at all.”

All the proceeds from the day will be shared between the primary school, the Sonning Common FISH volunteer service, Sonning Common first responders and the Sue Ryder hospice in Nettlebed, which was running a tombola and bric-a-brac stall.

Mrs Snowden said she was pleased with the good weather, especially after the recent snow.

She said: “Someone is clearly smiling on us as there must be a reason why it keeps being so successful! I’m once again delighted with how it went and the great turnout.

“We never envisioned this as a long-term endeavour but it has become so special for our community and is also attracting people from a little further away.

“I don’t think any other village has something like it and we were so lucky to get that many riders given the challenging conditions.

“We were worried about the state of the roads as, like everywhere else in the country, there are a lot of potholes and road users need to be careful.

“However, you have to be able to cycle in different conditions and everybody behaved responsibly. An event like this couldn’t happen without a body of people behind it and we’re lucky to have so many volunteers. It amazes me that people are willing to stand on a cold, blustery corner making sure everyone is safe and helping if they get a puncture.

“They do it year after year and this is now very much embedded in the community, which is quite a responsibility.

“I was overwhelmed to see so many kids and teenagers from other schools taking part as it’s so important for them to stay active and cycling is a wonderfully healthy and sociable activity.

“The most important element is the community spirit, friendships and unbelievable achievements of everyone who takes part.”

On Your Bike has raised more than £50,000 for good causes since it was launched in 2007 by Mrs Snowden and Sonning Common Health Centre, which sponsors it.

• More pictures will be published in next week’s Henley Standard.