Have you heard the one about the food critic? 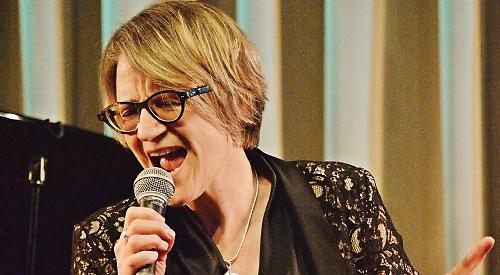 JAY RAYNER had his audience in stitches throughout a performance in Henley.

The food critic, broadcaster and jazz pianist told a series of increasingly risqué jokes and anecdotes between songs during a concert for an audience of about 200 people at Phyllis Court Club on Friday evening.

The Jay Rayner Quartet, whose appearance was organised by the Henley Festival, featured the man himself on piano, his wife Pat
Gordon-Smith on vocals, Rob Rickenberg on double bass and Dave Lewis on saxophone.

They performed 15 songs with a theme of food and love, beginning with Glenn Miller’s It Must Be Jelly ‘Cause Jam Don’t Shake Like That, which Rayner said reminded him of his weight.

He said: “I was flying to New Zealand last year and since it was first class I decided to take advantage of the showers. I went in, took off my clothes, looked in the mirror and, yep, same f****** body.

“Although it seems odd to be singing the blues about being paid to eat food and write about it.”

Rayner jokingly described himself as “the best jazz pianist in Britain out of all the people who review restaurants” and shared stories about his late mother Claire Rayner, a journalist and agony aunt who died in 2010.

He said: “People often accuse me of nepotism but how having a mother who’s an expert on premature ejaculation qualifies you for a stint on MasterChef is anyone’s guess.

“Growing up with an agony aunt for a mother was an interesting experience because all her letters came to the house and she made clear that they were very serious and not to be laughed at but a couple of them stood out.

“I remember one woman was convinced her husband had been unfaithful as she’d found female footprints inside his car windscreen.

“Someone had to open the letters after all and it was a perfect pocket- money job for a 10-year-old.

“When I was young I knew many uses for natural yogurt that no one my age had any right knowing.

“I could also spot a woman going through the menopause at 50 paces, which was of limited use at the time but became invaluable as I got older.”

One letter writer was concerned that part of his anatomy was misshapen so he had made a replica wood carving and sent it to the agony aunt in a parcel.

Rayner said: “Mum opened the box with a look of surprise that I wasn’t used to seeing. The gentleman had clearly had a long, hard think about his problem.

“The object in question remained in the family and my brother even got it out at my mother’s funeral.

“It was something of a family heirloom — couldn’t we have had a table or a nice painting?”

In the Nineties, his mother was once walking through Westminster with novelist and disgraced former MP Jeffrey Archer when they saw a woman knocked unconscious by a passing car. The pair went over to help and the woman began to come round.

Rayner said: “She was becoming conscious again to see Claire Rayner and Jeffrey Archer standing over her, so she must have wondered whether she’d gone to heaven or hell!”

He also touched on his broadcasting career, including his role as food presenter for the BBC’s The One Show.

He said: “I once did a piece on posh chips, like chips cooked in duck fat and what have you. We went up to this one old lady in the street and asked if she’d like to try a polenta chip.

“She just shot back, ‘that’s disgusting’ and I asked why. She said ‘how can you eat chips made from afterbirth?’”

Rayner said he honed his musical skills by playing regularly at the Ivy Club in London, where he had bonded with more experienced musicians over a shared love of food.

His set included The Ladies Who Lunch by Stephen Sondheim, Dance Me To The End Of Love by Leonard Cohen and History Repeating by The Propellerheads.

During a spoken interlude in Better Than Anything by Irene Kral, Rayner took a dig at Prime Minister Theresa May for calling last year’s snap general election in which the Conservatives lost their overall majority.

He asked: “Is it ‘better than’ the look on Theresa May’s face at one minute past 10 on June 8 last year, when she realised what she’d done?

“And now that Michael Gove is Secretary of State for the Environment, is it ‘better than’ him experiencing a non-harmful but nonetheless quite humiliating accident involving slurry?” Glancing towards the audience, he added: “Okay, we’d better start the engine and get ready to leave. Don’t worry, they still have to pay us!”

He added: “I want to say a big thank-you to the [Henley] Festival. It’s a brilliant event in so many ways so please support it.”

The evening ended with a rendition of Stevie Wonder’s Hallelujah I Love Her So and the jazz standard Summertime.

Then Rayner chatted with guests and signed copies of his books My Dining Hell and The Ten (Food) Commandments.

He told the Henley Standard: “It was fantastic — we had a noisy crowd, which is always a good sign. I’m not sure they knew what they were going to get but they loved it. Well, they applauded in all the right places, at least!”

Stewart Collins, the festival’s artistic director, said: “Jay is an incredibly versatile performer and it’s fascinating to see how someone who’s known for one thing is appreciated for doing something totally different.

“He had a natural feel for what the audience wanted and everyone warmed to him immediately. It was a wonderful evening and everybody thoroughly enjoyed it.”

• This year’s Henley Festival will take place from July 11 to 15 and include headline performances by Rita Ora, Grace Jones, Nile Rodgers and Chic, Curtis Stigers and Ronnie Scott’s Big Band and the English National Opera. For more information, visit
henley-festival.co.uk