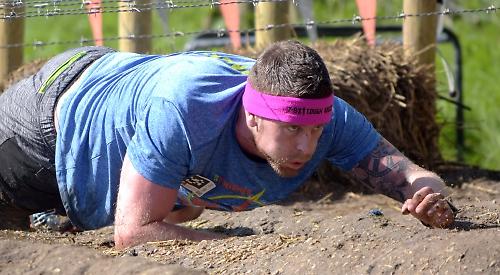 RUNNERS from across Britain took part in the fifth annual Tough Mudder endurance challenge near Henley.

They followed one of two routes around the Culden Faw estate at Hambleden while tackling a variety of obstacles that tested their strength, stamina and pain resistance.

These included the Kiss of Mud, in which they had to crawl beneath a mesh of barbed wire while navigating deep and wet mud, and the Arctic Enema, in which they slid into a tank full of freezing water.

There was also the Devil’s Beard, in which they crawled under a 50ft long cargo net made of heavy rope, and the Block Ness Monster, in which they had to negotiate a rotating platform that spun over a tank of dyed water.

New obstacles for this year included Kong Infinity, in which runners had to cross a set of overhead bars by hanging from the bottom of a barrel while pedalling it using hand grips.

A returning challenge was Electroshock Therapy, where challengers had to run through a corridor of live electrical cables that would shock them upon contact.