Farewell to man who loved railways 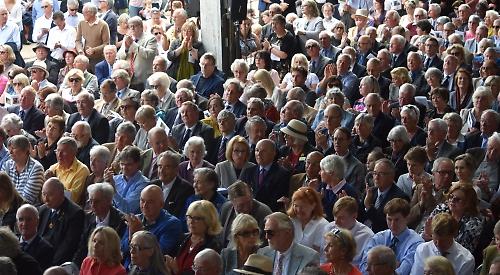 HUNDREDS of people gathered to celebrate the life of Sir William McAlpine.

A memorial service was held at the Fawley Hill railway museum in the grounds of his home, where he was laid to rest in March following his death.

There were readings, performances and speeches by family, friends and colleagues while guests were able to take rides on a carriage pulled by No 31, his old McAlpine works engine.

The footbridge over the tracks had been decorated with red, heart-shaped balloons while the stage received the same treatment as well as pictures of Sir William, flowers and a metal sign with his name on it.

During the service many stood outside the museum building as all the seats were taken. It began with Robbie and Ben Gibbons leading in members of Sir William’s family, including his widow Judy, to take their seats.

The group included Sir Henry Aubrey Fletcher, the Lord Lieutenant of Buckinghamshire, who attended on behalf of The Prince of Wales.

Rev Stephen Southgate, rector of the Hambleden Valley group of churches, gave an introduction to welcome the guests. He led the service and prayers with associate priest Rev Sue Morton.

“I welcome you all on behalf of Lady Judy McAlpine and all who live and work here at Fawley Hill for this service of celebration for the life of Sir William McAlpine,” Mr Southgate said. “As we gather from far and wide in these unique surroundings we are reminded of the many passionate interests that Sir William loved to support and share.”

Jazz trio Annie & The Doughboys then performed The Old Rugged Cross, a hymn by ‎George Bennard. This was followed by the Shiplake College Chamber Choir, who sang Psalm 23 from the platform above the audience.

Sir John Madejski read John 14, verses one to six but before starting, he said: “He was the greatest gentleman I have ever had the privilege of knowing.” This was met with applause and cheers from the audience.

Lady McAlpine then gave a tribute titled “A very special man”. She said: “I said to Stephen [Southgate] that Bill’s father’s memorial service was at St Paul’s and we are going to need something of a similar size.

“But it was not very Bill, so I asked about the museum. Stephen said ‘that’s ok, God is where you are’. I’m sorry a lot of you are going to have to stand for so long but we could not get any more seats in. You are all here because you share your love and admiration for a man who stole all our hearts.

“To quote so many of you, he was the wisest, kindest, most inquisitive, generous, funniest, ‘genti-est’, most lovable creature you have ever met. People say why on earth was he never made peer, he had so much to contribute, but if he had been offered it he would probably have suggested someone more deserving.

“Bill’s father Edwin used to say there was not enough generosity and spirit in the world, Edwin would be proud to see that Bill had enough for 100 men.

“He adored young people and they adored him. Some of the most touching emails and cards I have received have been from small children who loved him and their lives have somehow been shaped by knowing him. He was, of course, not really a grown-up.

“We must maintain his work and keep it going. I cried when I thought about Fawley without Bill but Andrew [Sir William’s son] said Fawley has a McAlpine. Of course, thanks to Bill I am a McAlpine. I will make very sure I spend the rest of my life is spent protecting Bill’s incredible legacy.

“Furthering his aims, finishing his projects, caring about those for whom he cared and that includes Fawley and everyone who plays here and works here. Long may it continue.”

Marcus Binney, an architectural historian and author, then spoke about the conservation work done by Sir William. He said: “Everyone here will have their own fond memories of Bill. He was a man of huge and ever-present charm.

“He shared his enthusiasms and affections with everyone he met. What better place to celebrate Bill’s life and achievements then in these elysium fields he himself created. An English country house park like no other. Fawley Hill is not a remarkable museum but a unique private railway and an actual national treasure of our age.

“We can imagine, that on arriving at the pearly gates Bill presented St Peter with a working plan for railways in heaven, complete with pullman’s cars serving shepherd’s pie and sticky toffee pudding.”

Lord Faulkner, of Worcester, then took to the stage to give his tribute titled “The Railway Baronet”. He spoke about his work in railway heritage.

“I have never been to anything like this before and it is for such an extraordinary man,” he said. “We are hearing today about so many aspects of Bill’s life and his towering achievements. It is hard for any of us to speak about any one aspect others are not covering. Bill was simply the most wonderful host – kind, generous and extraordinarily good company.”

Lord Faulkner also announced the National Railway Museum, where he is a trustee, would organise a Flying Scotsman memorial run in the autumn with Lady McAlpine.

Sir William saved the train in 1973, by buying it after it was left stranded in America following a financially disastrous tour.

“It is our way for saying thank you for saving Scotsman, getting her back to the UK and successfully operating her for 23 years,” Lord Faulkner said.

The audience then came together to sing Battle Hymn of the Republic, which was Sir William’s favourite hymn.

Andrew McAlpine, Sir William’s son, gave his tribute titled “Father”, talking about him as a “proper gentleman”, commitment to his duties and his good humour.

Andrew said: “Humour was, of course, at the heart of all of this and was a constant trend. He was a naturally jolly person. When he was in intensive care in the Royal Berkshire [Hospital] he made my sister laugh when he asked her whether she would like to see him fly. Mystified, she left the room for a cup of tea. When she returned she witnessed him suspended in mid-air in a sling.”

Tony Gaines and Peter Bethel then performed the Irish folk ballad McAlpine’s Fusiliers before Nick Bastian read “The Rules” followed by a series of short tributes titled “Bill by a few of those who loved him”.

Jerusalem was then sung by the audience and then Gillian Nahum, from Henley, then read the poem Night Mail by W.H. Auden before the Gibbons brothers took to the stage to perform Cock O’ the North playing the bagpipes.

They were followed by Sir William’s friends David Morgan, Andy Savage, Bill Devitt and Anthony Coulis, who spoke about his love of steam power.

Chris Littledale, the founder of the Brighton Toy and Model Museum, performed “The Sound of Scotsman”, using his voice to recreate the sounds of Flying Scotsman moving.

He said: “I am certain Bill was always regarded as being incredibly honourable by his clients. He was a man of his word. They knew when Bill committed to delivering something the business would do that.”

This was followed by Samantha Woods speaking about Sir William’s love of hugs, which is how he greeted all he met and read a poem about the power of hugs.

Matilda Palmer then read her tribute to her grandfather. She said: “Now he has gone, he has gone only up. I am sure he misses us all thoroughly but I bet you he would want us to remember the happy times we had and carry on our lives in memory of him and of what he did.”

Prayers were then led by Rev Morton, before the audience sang the hymn Lord of the Dance and Shiplake College headmaster Gregg Davies and pupil Robbie Rayne sang a duet of I’ll Walk With God by Mario Lanza. Rev Morton then gave a blessing and the Last Post was played by Sir William’s grandson Archie from the footbridge over the railway.

Each guest was given an order of service, which included illustrations by cartoonist Gray Jolliffe, from Hambleden.