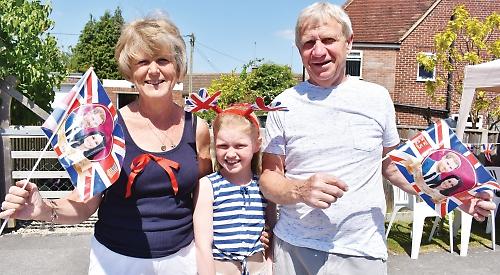 RESIDENTS of a Goring street held a party to mark the royal wedding.

About 70 people attended the celebration in Cleeve Down, which was organised by resident Angela Bell.

Guests all brought a plate of food to share and there was Pimm’s, Prosecco, tea and coffee on offer.

The day included games such as apple bobbing, a tin can alley, splat the rat and a coconut shy.

Mrs Bell said: “We just thought it would be nice to get the neighbours together. There are a lot of newer, younger people who have moved on to the estate and we don’t know them.

“I wanted to get to know everybody and a lot of these young people did come so it was really nice.

“It was great and everybody came to me before they went and said, ‘thank you very much, we’ve had a really good time’.

“I think we’re really lucky that we still have the monarchy in this country. Like eveything else, it has to move with the times otherwise they get left behind and it was really refreshing to have a bit more modern wedding.”

Resident Jeremy Merrill said: “Anything to do with the royals I’m for. They have been ruling this country for hundreds of years and I think we should support them.” Tracey Wibberley said: “This is a good opportunity for all age groups to get together, especially the families of those living in the street, and have a nice time.”

Brenda Lynch said: “It’s marvellous and it’s an important day — the royal family are lovely.” Jason Giles, from Didcot, brought his family to visit his parents John and Margaret, who live in the street.

He said: “A lot of the neighbours have lived here over 40 years. There’s a sense of occasion and of community as well.”