Sea and air cadets line up for inspection 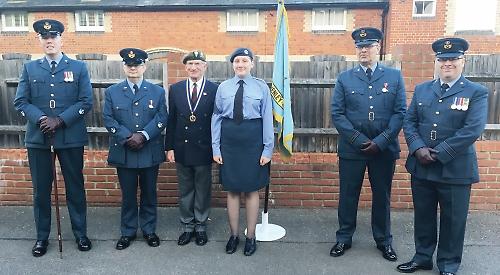 MEMBERS of Henley Sea Cadets have had their biennial inspection by a royal navy officer.

About 30 youngsters were inspected by Commander Trevor Price during a ceremony at TS Guardian, their base off Wargrave Road. It was attended by parents and guests including Berkshire district chairman Andrew Adamson and Henley Mayor Glen Lambert.

Cdr Price was introduced to each unit of the sea cadets and marines and spent about two minutes talking to each cadet.

The youngsters then took part in demonstrations called evolutions, including “rescuing” a buoy from the river and setting up a camp and fire.

Cdr Price gave a talk and recommended the unit for a burgee, a maritime flag which distinguishes the unit as among the top 20 per cent in the country.

Unit chairman Phil Fletcher said: “It went exceptionally well. The inspecting officer did a superb job of talking to every cadet for some time, asking how long they had been a cadet and what they liked the most.

“He was particularly impressed with the smartness and evolutions and had no hesitation in recommending that the unit be awarded a burgee. It was a very pleasing evening with an excellent result.”

The sea cadets meet on Monday and Friday evenings. They spend the summer months rowing and power boating on the River Thames as well as doing land-based activities, including piping, first aid and cookery.

Meanwhile, the Henley Air Cadets were inspected by Sqn Ldr Mark Trevena, deputy wing commander for the Thames Valley, at their headquarters in Friday Street. Parents and a number of guests attended the ceremony, including John Green, chairman of the Henley and Peppard branch of the Royal British Legion, and town councillors David Eggleton and Kellie Hinton.

The cadets gave first aid demonstrations and presentations about their activities this year.

Squadron officer Tim Keating said: “It’s an annual inspection by the deputy wing commander and his team, who look at how well the cadets are doing.

“It went very well and the deputy wing commander was extremely pleased. We’ve got quite a few new cadets and he was amazed at how well they did.”

A raffle organised by the councillors raised £83.