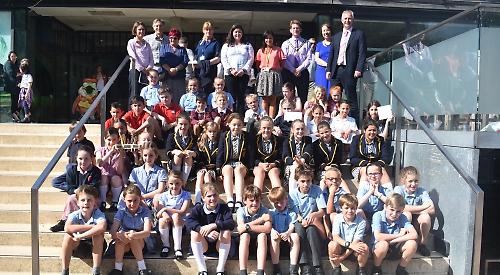 St Mary’s School in St Andrew’s Road and Sacred Heart Primary School in Greys Hill finished ahead of six other school teams in the contest.

The winning teams were awarded a trophy and a cheque for £175 each by Henley Mayor Glen Lambert at a ceremony at the River & Rowing Museum attended by their parents and teachers.

Two teams from Rupert House School in Bell Street finished joint third and were awarded £50 each.

Each school team had to give presentations on a project they had carried out.

The girls examined plastic waste and spoke to friends, parents and staff at the school to find out what could be done to reduce it. They also made artworks from plastic lids and containers.

The children investigated the effect of climate change on plants, looking at the effect of different stimuli. Both teams produced a booklet describing the work they had carried out.

Linda Wild, science teacher at St Mary’s, said: “We learned about this as a whole school project. We were even getting children in nursery talking about the problem of plastic in the ocean.

“Parents got on board and children changed their habits by not ordering straws or using water bottles.”

Jackie Park, a year five teacher at Sacred Heart in Greys Hill, said: “We are delighted to have won. It started before Easter when we had a speaker from the University of Reading. Alongside the project we have grown bulbs and sunflowers.”

Councillor Lambert said the children’s work was of excellent quality and they clearly had a passion for their subject.

“This generation is growing up in a world where caring for the environment is the norm,” he said.

“It was particularly nice to see Henley’s state and private schools working together.”

The Rupert House School teams carried out projects on single use plastic and food waste in Henley.

The other schools that took part were Badgemore and Trinity primaries in Henley and Shiplake and Sonning Common schools. Every school was given a voucher for a fruit tree.

It was the seventh time the competition had taken place but the first since Henley in Transition took it over and made it an annual event. It was previously held every two years.

The contest was revamped this year, with the presentations taking place on the day rather than the judges visiting the schools.

Competition co-ordinator Patrick Fleming said: “The number of entries was double what we’ve had before and there was a very high standard, which made it hard for the judges to decide.

“The children liked to show off their projects and engage in peer review.”

The competition was sponsored by Quintessa, the Thamesfield Youth Association, the Henley Veterinary Practice, Henley in Bloom and Henley Town Council.