I’m still getting over IRA bomb blast 25 years ago 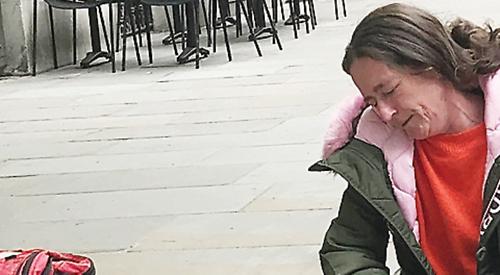 A WOMAN who was caught up in a deadly bomb blast in London returned to the scene 25 years later.

Jules Bishop was a 23-year-old student in the capital when the IRA detonated a powerful truck bomb in Bishopsgate, a major thoroughfare in the City, in April 1993.

One man was killed and buildings including St Ethelburga’s Church, the NatWest Tower and Liverpool Street station were destroyed by the force of the explosion.

Ms Bishop, who is now 48 and living in Cookley Green, near Nettlebed, with her children Poppy, 13, and Felix, seven, says she is still not over the trauma of the attack.

As a child, she lived in nearby Howe Hill and attended Swyncombe School and then Gillotts School in Henley.

She was in her final year at London Guildhall University studying French when the blast happened.

She was walking to work at a wine bar in the City with a friend when the police received a warning phone call about the bomb.

Ms Bishop recalls: “When we got to the City, there was a bomb alert and streets had been cordoned off, so we were walking around, trying to find a route to the bar.

“We were on the wrong side of the City and couldn’t get round. We tried to get as close to the bar as possible so that when the scare finished we would be ready to work.

“There were bomb scares all the time then so it was almost normal and just inconvenient.

“Nothing ever happened so we thought, ‘let’s just get to work’.”

The friends were just 300m from the bomb when it went off.

Buildings within a 500m radius were destroyed, a large crater opened up in the middle of the road and a huge mushroom cloud appeared over the City.

Ms Bishop says: “There was this huge vacuum before the explosion, like a deep in-breath, and I just had a feeling of impending doom.

“It was a strange sensation. I can best describe it as that moment between the guillotine sliding down before it cuts the head off, or the time between a bullet being fired and it hitting its target.

“You are in fear for your life and just don’t know what to do.” Ed Henty, a News of the World photographer, was killed and 44 people were injured. The financial cost of the damage was estimated at the time to be more than £1 billion.

Ms Bishop says she can’t remember the blast itself but recalls running towards a building for cover when her friend shouted that there was glass raining from the sky.

She said: “I think she saved me from bad injuries or worse.

“After that we both just ran. A mounted policeman found us and told us to run to Bank station.

“We got there and I phoned my mum and my flatmates. We then wandered aimlessly around the streets — we were shellshocked.

“We spent hours just walking around. We had no idea what was going on so we went back to a friend’s house and just went to bed.

“That evening was one of our flatmates’ birthdays and we had arranged to go out. We didn’t want to but maybe it was a good thing. We were in a diner in Hackney and the TV monitors in there were on. There we were on TV running down the road. It hit home then and was quite surreal.”

Ms Bishop says she was lucky to escape injury but the experience left her with psychological issues.

She struggled with life in London so moved to Paris and spent two years working for a CD manufacturer.

She then returned to London briefly before moving to Cookley Green in the late Nineties.

Ms Bishop says: “I’ve lived with the emotional trauma ever since.

“I had to escape London because I was having panic attacks and went to Paris but that was a mistake because it’s another capital city with lots of buildings.

“There were too many large buildings so I came back to where I felt safest.”

Despite, the attack, she has lost her initial hatred for the IRA. Ms Bishop says: “When I was growing up in the Seventies and Eighties in Henley, I made my mind up that all the terrorist groups in Ireland and Northern Ireland were as bad as each other. They seemed to have caused an equal amount of civilian casualties.

“After the bomb, I initially had intense hatred for the IRA but as time went on, I went through a period of sympathising with them.

“I mean, how could they go to the extreme lengths of killing and injuring innocents unless they had a very good, valid cause?

“My feelings changed again and now I’m back to thinking the IRA were just as bad as all of the other terrorist organisations.

“But I bear no malice towards them as that would just consume me in the end.”

Ms Bishop, who is now studying fine art part-time at Northampton University, returned to Bishopsgate on April 24 — the day of the 25th anniversary — to present a video art project called “If I hear a loud bang, I’ll count to 10 slowly then walk towards it”.

The video, which combines images, news reports and first-hand accounts of the attack by her and her friend Mandy Ball, was shown on a big screen on the back of a van which drove around the area.

She says: “It was my way of saying that throughout the years it has affected me but I’m thriving now.”

Ms Bishop also gave a two-minute visual performance expressing her feelings at the exact spot where she and her friend were when the bomb went off at 10.27am.

She says: “For the anniversary, I knew I wanted to be in the same spot that I was when the bomb went off. Doing it at 10.27am to the minute was important to me. To really feel it. It felt like a triumph.”

She says that while she hasn’t yet exercised all her demons, she is pleased to have returned for at least some closure.

Ms Bishops says: “I found it cathartic and would have regretted not doing something. It’s like sticking two fingers up and saying, ‘I’m okay’.

“I’d gone from a survivor, to a thriver and I hope my project will give hope to those who have suffered with trauma. I’m proud of it, it was important.”

For information about her art project, visit http://julesbishop.com