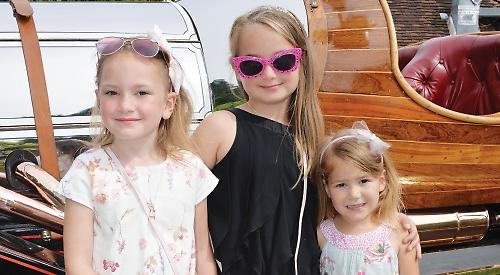 THE original car from Chitty Chitty Bang Bang was the main attraction at a summer party held at the Five Horseshoes in Maidensgrove.

Children could climb inside the vehicle and enjoy rides to the nearby pond at Russell’s Water, where parts of the classic children’s film were shot 50 years ago.

They also enjoyed honking the old-fashioned bulb horn, which is designed to appear like a snake with an open mouth.

The car, also known as GEN 11 after its registration number, is one of six that was specially commissioned by Eon Productions in 1968 and the only fully-working model.

It has a 3.4-litre Ford engine with automatic transmission and is designed in the style of a racing car from the early 1900s, when the film and original novel by Ian Fleming are set.

It is owned by broadcaster Chris Evans, who lives in Ascot and is friends with Five Horseshoes landlords Dan and Tracey Taverner as he runs a pub in Surrey himself. The Radio 2 breakfast host was unable to be there but sent two experts who talked about the vehicle and drove it throughout the event.

About 400 people attended the party, many wearing period costumes as they posed for photographs with the car. There were screenings of the film on a projector inside the pub while a stage was set up in the grounds where a live rock band performed.

Children could ride a pony with the Learn With Smartie riding school in a field behind the pub and there was also face-painting, a barbecue and a hog roast.

Another stall sold “toot sweets”, a whistle-shaped sweet that featured in a song of the same name in the film.

All profits from the event will be shared between Russell’s Water village hall and Marie Curie Cancer Care.

Mrs Taverner, who is a member of the hall committee, came up with the idea last year.

Other members suggested a Chitty Chitty Bang Bang theme because of the anniversary and when she mentioned this to Evans, who regularly dines at the pub, he offered to loan the car.

The Taverners’ daughter Sophie said: “We’re very grateful because it was such a kind gesture for him to loan the car and it made so many people happy.

“The party went really well and was such a nice way to bring everyone together.

“We were amazed at how many guests turned up and how far some had come from. We had help from a lot of volunteers and we’re grateful to all of them.

“It was such a colourful occasion and there was a real sense of community spirit.

“The children especially loved it — I suppose not all of them had seen the film but they were all very excited to climb inside the car.”

The pond at Russell’s Water originally featured in the scene where leading lady Truly Scrumptious, played by Sally Ann Howes, crashes her car into it.

The Cobstone Windmill at Ibstone, which overlooks Turville, also appeared as the home of inventor Caractacus Potts, played by Dick Van Dyke.

The vehicle, which was able to fly in the story, was driven by several cast members including van Dyke, who later said it handled “like a battleship”.

Mr Evans bought the car at auction in 2012. It was previously owned by the film director Peter Jackson.