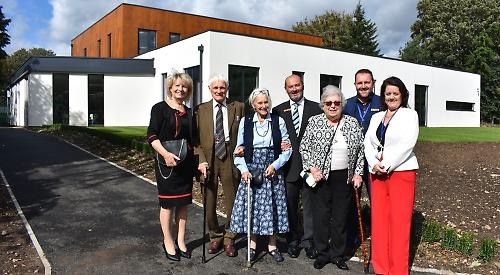 A NEW £4 million fitness centre at Phyllis Court Club in Henley has been officially opened.

The centre opened to members of the private members’ club off Marlow Road on Monday following a special preview weekend featuring tours of the facility.

The guests were served champagne and given tours of the facility as well as meeting fitness staff. Mr Jackson said he had been involved with the project for five years, originally as deputy chairman to Patricia Christmas from whom he took over in May.

He said: “I have the huge honour of opening it. Patricia has done an absolutely incredible job of pushing it to the stage it is today.

“There has been an absolutely massive effort from everyone involved to get where we are. Together we finished on time and on budget.” Mrs Christmas, who served as chairman for three years, added: “It’s fabulous and much bigger than I envisioned.

“It’s a beautiful facility, just right for our members and I’m looking forward to using it myself.

“They’ve been wanting a pool here since 1929 and now we’ve got one as well as a gym. It’s the last piece of the jigsaw for the members, so now we’ve got everything to offer them.”

Mrs Venables, who travelled from Chichester for the ceremony, called the centre “marvellous”.

She said: “My uncle dreamt up this club when he was a boy at Radley School and he used to row past this great but empty building. He got his grandfather to back him. I can remember back to when my uncle said the one thing missing was a swimming pool.”

Mrs Venables was presented with a framed picture of the centre by Caroline O’Connor, the club’s commercial director.

The first people to use the pool were about 20 members chosen from a special draw in aid of the club’s charity action group.

They included Wokingham borough councillor Graham Howe and John Luker, life president of Higgs Group, publisher of the Henley Standard, who did lengths of the pool.

The centre was built on the club’s old tennis courts. A working group was set up in May 2015 to form a business plan, which was approved by members the following year.

The centre will offer Pilates, aqua fit and salsa classes and therapies such as beauty, physiotherapy and podiatry.

As the centre neared completion, the number of club members soared to reach the maximum of 3,250, so anyone wanting to join now has to go on a waiting list.