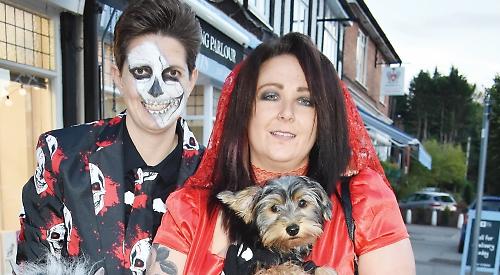 A COCKER spaniel dressed as a pumpkin won a Halloween fancy dress competition for dogs in Henley.

Six-year-old Coco was entered by her owner, Claudia Kerry-Roger, 13, from Medmenham.

Claudia dressed in a matching outfit for the annual contest, which is run by the Naughty Mutt Nice dog grooming parlour in Reading Road.

She said: “This is the first time we’ve entered. We saw the competition advertised in the Henley Standard.” She won a voucher entitling Coco to a spa treatment and full groom. About a dozen owners and their pets in costumes gathered outside the shop on Wednesday evening last week.

They were judged by owner Karole Robertson and staff James McEwen, Tilly Matthews, Josie Lambourne and Katie Silverday, who were dressed as characters including the Joker and the Pink Panther.

Fatima Maktari, director of Tribal Pet Foods in Chinnor, was a guest judge. Among the other outfits were skeletons and bats, while Mrs Robertson dressed her Lakeland terrier Tiggy as Minnie Mouse. Several owners were dressed as zombies and werewolves.

The second-placed dog was Percy, a 16-week-old Yorkshire terrier owned by Amelia and Charlotte Kennedy, of Singers Close, Henley.

Mrs Kennedy said: “I saw the competition advertised last year and thought, ‘I want a dog so I can do that!’ When we got him it was really good timing as he has only been able to walk outside for just over a week.

“We got him the skeleton costume as the black goes well with his fur.” Third place went to Poppy, a four-year-old golden retriever owned by the Aspden family of Greys Road, Henley, who was dressed in a pair of bat’s wings.

Mrs Robertson, from Ruscombe, said: “The entries this year were great. We saw a lot of different outfits and people had put the effort in. We will definitely do it again next year.”