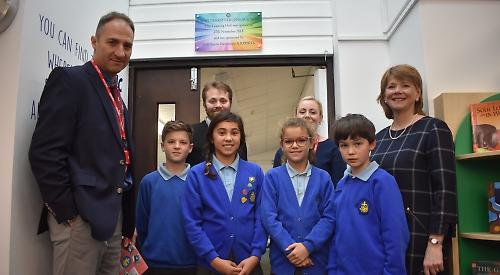 A NEW learning hub has been opened at Robert Piggott Junior School in Wargrave.

The room has been formed by combining and refurbishing the library and IT suite at a cost of £22,000 and has new furniture and equipment including laptops and iPads which can be used in lessons or for study.

The project was funded by the school’s parents’ association and a donation of £10,000 from Harry Hall, director of the Hall Hunter Partnership in Wokingham. Mr Hall unveiled a plaque in the new hub watched by current and former staff, pupils and Sally Reason, who chairs the parents’ association, as well as parish councillors.

The children presented a thank-you card they had made to Mr Hall.

The school choir then performed Someone’s Watching Over Me by Hilary Duff and When Children Rule the World from the Andrew Lloyd Webber musical Whistle Down the Wind, which they also sung at the annual concert at St Mary’s Church in Wargrave last month.

Executive headteacher Sally Ann Akers said: “Some of our smaller groups used to have to find a little corner of the staff room but that wasn’t really a learning space for children. Now they can go in to the learning hub and find a cosy place to learn.”

Mrs Reason said: “We are really grateful to have raised enough money to enable the school to change this space, which wasn’t used, into a nice, bright learning hub. The children can enjoy coming in here to read and use the laptops. We now hope to do a similar project at the infant school.”

Mr Hall said: “It’s a pleasure to be able to take a less used area of the school and turn it in to an energising, functional space.

“Supporting and being a positive part of the community is something close to our hearts. Anything we can do support them is what we want to do.”