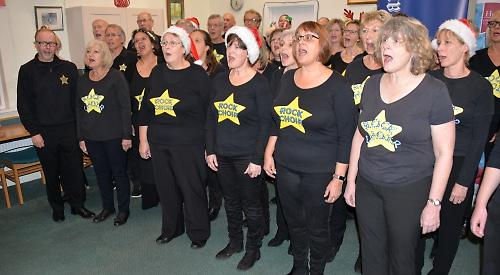 HENLEY Rock choir was Thursday’s surpise act on the sixth night of the Living Advent Calendar.

About 100 people attended the performance at the Henley 60+ Social Club, in Greys Road car park, which was the first time the venue has hosted the event.

Together they rattled through a range of contemporary hits and Christmas classics such as Shakin’ Stevens’s Merry Christmas Everyone, accompanied by choreographed dance moves.

The evening raised £231 for the Wyfold Riding for the Disabled, which provides horse riding for those with physical or mental disabilities.

The crowds who filled the club were served mince pies, sausage rolls and wine provided by Knox & Eames Chartered Accountants.

Organiser Richard Rodway said: “The Rock Choir are fab and it was such a polished performance. It just makes for that great community support.