Let’s rock: pupils learn how to perform like musicians 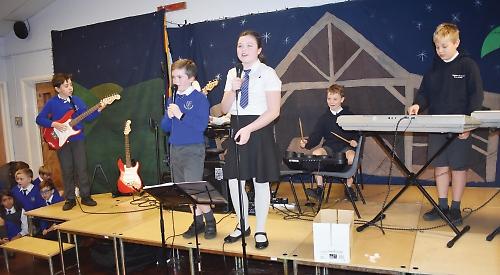 CHILDREN at Shiplake Primary School staged a rock concert for their familes and friends.

About 30 pupils performed in the school hall, playing instruments including the drums, electric guitar and keyboards as well as singing.

The show was the culmination of a series of weekly half-hour lessons given by iRock School of Music during the term.

The children were split into five bands, the Magic Unicorns, the Fox Hunters, The Ums, The #DJs and Frizzy Rascals.

Each performed a song, including This Is Me by Keala Settle, Hold Back the River by James Bay and Pompeii by Bastille.

Parents and fellow pupils in the audience clapped and sang along and there was rapturous applause and cheering after each band had finished their number.

After the concert, the children posed for pictures with their instruments. Coach Adrian Reid said: “They are a totally different group of children from when they first joined the bands.

“They grew in confidence each week and this was reflected in the way they performed on stage.”

Josh Franklin, head of iRock, said: “They were great. Some of them wouldn’t sing on a microphone for the first two weeks so to be able to do that is absolutely brilliant. My aim is to help children fall in love with music. The look on their faces as they experience their first concert or play an instrument for the first time in front of a crowded hall is unbelievable.”

Music teacher Anthony Tugwell said: “I was really proud of them to achieve this in such a short space of time.

“They were all happy to get up there and do their best, which shows their great confidence.”