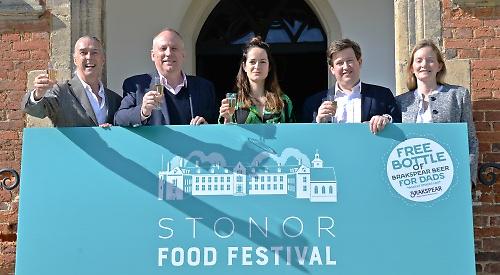 THE second annual Stonor Food Festival has been officially launched.

Chefs and other guests who will be appearing at the event on June 15 and 16 gathered at the Stonor Park estate, where it is taking place, to share their plans.

The festival will feature more than 60 artisan food and drink stalls, many selling produce from the Henley area, as well as talks and demonstrations on different aspects of cookery.

Speakers include French chef Jean-Christophe Novelli, whose restaurants have won multiple awards, and Atul Kochhar, who runs the Sindhu Indian restaurant in Marlow and was the first Indian chef to be awarded a Michelin star. Mr Novelli will be appearing on the first day of the festival and Mr Kochhar on the second.

Also appearing will be Henley Standard food columnist Paul Clerehugh, who runs the Crooked Billet in Stoke Row and the London Street Brasserie in Reading.

He said: “I’m looking forward to it. I visited the first festival last year and there was such a clever variety of stalls with so many free samples and it was wonderful to meet the producers who grow or manufacture their own goods.

“I’ve got three little girls and they really enjoyed it as they were able to play at the park’s Wonder Woods adventure playground so it really is a family day out.

“I’m thinking of doing fallow deer for my demonstration, although the park has a lot of deer so it might be a bit inappropriate! I can guarantee I’ll be doing something with local produce.”

Olivier Bouet, who runs Olivier at the Red Lion at Britwell Salome, is also appearing.

He said: “My restaurant is just up the road so the least I can do is support this. I’m not used to giving talks as I’m more of a hands-on chef but it will be a good experience and I’m looking forward to it.”

The Hon William Stonor, who runs the estate, said: “We always wanted to host a food festival and it’s great to see it’s growing.

“The first one was hugely successful and we’ve seen a lot of interest in this one on social media so I’m sure it will go from strength to strength.”

Other fixtures will include a wine and cheese tasting hosted by Martin Chapman, of Watlington Fine Wines, and Rose Grimond, of the Nettlebed Creamery, as well as demonstrations on foraging, barbecuing and nutrition.

To celebrate Father’s Day, the first 1,500 fathers to attend will receive a free bottle of Brakspear beer.