Many happy returns for regatta 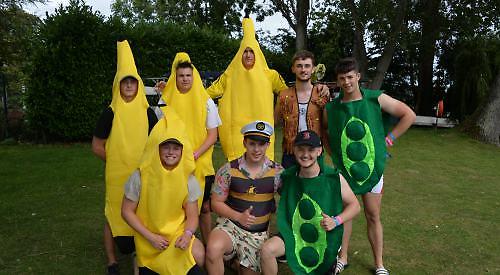 HUNDREDS of people attended the Henley Regatta for the Disabled on Saturday as it marked its 10th anniversary.

There was a wide range of attractions both on and off the water as the event took place in the paddock at Phyllis Court Club, off Marlow Road.

These included competitive but friendly bell boat races between nine disabled and able-bodied teams on the River Thames.

The crews raced between the private members’ club and Henley Bridge and many spectators watched the action from two launches provided by Hobbs of Henley.

The prizes were presented by Henley Mayor Ken Arlett and Bruce Lynn, who runs adaptive rowing at Marlow Rowing Club.

The winners were Beer We Go and the runners-up were Aqua Holics. The Chiltern Centre team was named the most enthusiastic.

The other teams were Walleys, My Life My Choice, All For One, Bird in Hand, the Dodgy Paddlers and Totally Oarsome.

Disabled visitors enjoyed river trips on the cruiser Rivertime, which has been adapted to be wheelchair accessible.

On land there was a climbing wall, face-painting, an inflatable assault course and entertainers such as Daniel Briscoe, who performed magic tricks, and Professor Moon’s Punch and Judy show.

There was also a circus skills workshop where children could juggle and an area to play with toys.

Music was provided by the Phyllis Court Club choir, which performed a medley from Phantom of the Opera, and the club’s ukulele band. There was also a rock ’n’ roll performance by Barry Rosier and Roy Featherstone.

Graham Steward, 72, who runs the Bird in Hand pub in Greys Road, Henley, attended the regatta with his wife, Celia, 70, and granddaughter Louisa Dix, 15, of Rotherfield Greys, who has cerebral palsy.

He said: “It’s just nice to do something for people that need it. I think it’s really, really good because it is done in an excellent spirit.

“There’s no real competition and everyone knows it’s for charity and it’s a really fun day.

“My family have come down for the last three or four years. I’m usually working but I came down in the morning this year.

“I did not realise all the things that the kids can get up to. My grandson spent time on the slide and bouncy castle and he really enjoyed it — I think it’s great for the kids.”

Lucy Bowley, who took over as chairman of the regatta after last year’s event, said: “It was a great day. Half the people who came to the regatta took a river trip, including 19 who were in wheelchairs, which was fantastic.

“The feedback has been really good. We’ve had a few positive things come through on our Facebook page, which is really nice.”

She added: “We founded the regatta originally because, having been to Henley Royal Regatta, we realised there was absolutely no way that disabled children would ever be able to access anything like that.

“We wanted to put an event on the River Thames to enable disabled people to experience the river and give them the opportunity to enjoy themselves.

“Over the 10 years of the regatta we have probably had about 7,000 people come to the event. I would say that it has created lasting memories.

“It’s a really fun day and it’s not just the disabled people that get to enjoy it. It’s also great for carers and family members and that was really important.”

Mrs Bowley thanked Mr Howell for supporting the regatta since it began, saying: “He’s proud to be a patron.”

She also thanked Phyllis Court Club, the Shanly Charitable Trust for its financial support and the 30 volunteers from Henley Lions Club, the Rotary Club of Henley Bridge and the Henley Dragons who helped out on the day.

Mr Howell said: “It’s always a great pleasure to attend and see the competitions. As in previous years, I was able to commentate on the races a little, which is always good fun and I hope brings a smile to people’s faces as they watch.

“After 10 years, the event has become a firm part of the river culture and that’s a good thing because the purpose of the regatta is to show the river belongs to everyone.”