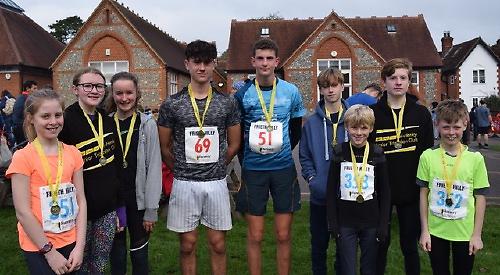 Adam Hunt was one of 197 competitors to take part in the 12th year of the event, with a further 90 runners involved in the shorter race.

The 16-year-old finished in a time of 38 minutes and 57 seconds and was only 11 seconds slower than winner Jason Leaf. He was among a group of young people and parents from Tri-Henley Junior Triathlon Club who were supporting the annual 5km and 10km races.

Hunt, of Beech Road, Tokers Green, has been a member of Tri-Henley since it was formed in 2014 and he is also a keen rower at Shiplake College.

The 5km run came just a week after he finished first in the Henley 10km, which he also won in 2017. Joanne Humphrey, chairman of the club, said: “This is such a lovely community event in stunning scenery.

“It is very challenging for our young runners, but the two distances give all our athletes the opportunity to take part.

“Some of our parents enter the races as well, which is very good for the club spirit.”

Hunt was not the only runner to impress from the club, as Will Hutchins, from Caversham, placed fifth in the 5km race, achieved a time of 22 minutes and 50 seconds.

Tri-Henley offers training to girls and boys aged nine to 17, including running, swimming and cycling under the guidance of British triathlete Sophie Whitworth.