Teenager beats own record in 5km 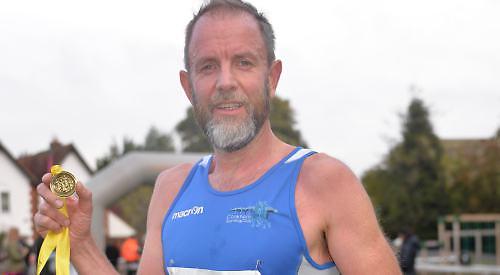 A TEENAGER defended his crown and beat his own course record after winning this year's Frieth Hilly 5K run.

Jacob Sanderson, from Frieth, was cheered over the finish line in a time of 17 minutes and 56 seconds by his father Nigel and the dozens of supporters who turned out for the event.

Participants lined up on a chilly morning for the 12th annual event, with the races getting underway at 10am.

Having won the 5K event 26 seconds faster than last year, 15-year-old Jacob was thrilled to cross the line first - and nearly three minutes quicker than his nearest competitor.

He said: “I really enjoy running and I always knew I wanted to get first place again this year. It was a bit slippery down the hill, but it had dried up so it was not too bad.

“Once you get going the cold weather is not too bad, but when we were standing on the start line it was cold. After winning last year, it was always the plan to come back and do it again.

“I trained hard yesterday, because I was not sure I was going to be able to win, but I felt really good once I got going. I just kept on going hard throughout.

“I like to run to keep fit and I play lots of other sports as well, but if it was possible I would like to take running further than just a hobby. I am not sure how I will do that, but I will just train as hard as I can and see where it takes me.”

Competitors and supporters met in the primary school playground and were given a warm-up session by Frazer Ashman, a personal trainer from Marlow.

There was then a blessing of the race, delivered by a retired priest, reverend Carol Kimberley. Guests were invited to sing Jerusalem before heading off to the starting lines.

Jason Leaf, 49, from Cookham, was taking part in his third Frieth Hilly 10K event and had never finished higher than the top 15.

His sister-in-law, Louise Goodchild, is a teacher at the primary school and he came out on top in the longer race in a time of 38 minutes and 46 seconds.

He added: “It is very cool to win. It might take a moment to sink in though. It is actually a pretty good temperature to be running with.

“The course is a pretty undulating mixture of hills and roads and there were a couple of boggy patches, but they were not too bad. I do ultramarathons, so 10K is not too bad.

“I have done the Ring of Steall Skyrace at Ben Nevis, which is running uphill for an hour. I do lots of hills, but that was not too bad.

“It is such a beautiful course and this is such a well-organised event where all the money goes to help the school.

“It is an awesome feeling and it is the best thing I have ever won. There was no way I expected to win.

“The lad who was just behind me went off like a bullet at the start. Because I do a lot of downhill running I caught up with him. I got him on the hill at the end, but we were both on the limit. I was having to give it everything to win.”

In previous years, the funds raised at the event have been put towards the school's outdoor adventure area.

This year's fund-raising pot will be put towards upgrading IT equipment, including the purchase of more iPads for the students to use in lessons.

Jo Reid, head teacher, thanked competitors for supporting the event. Her husband Matt, 46, who is chairman of Watlington Parish Council, took part in the 5K run.

Mrs Reid said: “The school, staff and children are always so amazed and so inspired by the community effort that goes into this event.

“We are always humbled that it is to support us and make the school better. It allows the children to develop and increase their potential, which is so important to us.”

The number of entries has declined in recent years, but event organiser Will Richards, who was overseeing his third race, said he was delighted to raise so much money.

He added: “The Henley 10K and half marathon was last week and it was a very hard run because of the weather. Normally, people do that and then do our event.

“We have put the decline down to the saturation of events in the area. But we were really happy with how it went and the feedback we had from runners was really great.

“There was a wonderful buzz around before the race started and everyone was so enthusiastic. It makes all of the early starts and late nights very worthwhile.”

1910382 – Jacob Sanderson with his father Nigel and his medal

1910384 – Jason Leaf collects his medal at the end of the race, amazed with his efforts