Cubs give 16 parcels to food bank after coin collection 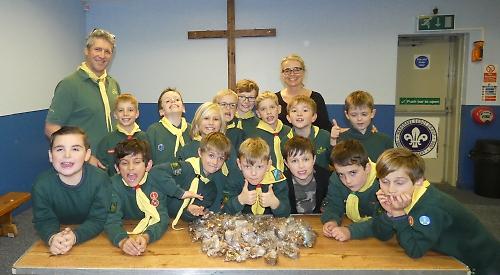 CUBS in Wargrave have donated 16 parcels to a food bank.

The Pumas from the 1st Wargrave scout group collected more than £100 in 1p and 2p coins from friends, family and neighbours in two months.

They then spent this on 200 items of food, including pasta, biscuits, tea bags and tinned goods, which they organised into 16 parcels which were then donated to ReadiFood.

The initiative was the idea of Jeanine Cummings, an American, whose son Jackson, nine, attends the group each week. She said: “I have a background of working with not-for-profit organisations that work with the homeless.

“In the States you can go to the food banks and help stack shelves but it just doesn’t happen over here, so that was a bit of a shock to me.

The cubs learned about the role of food banks and the cost of food.

Their efforts went towards their community impact badge.