The street of silly walks 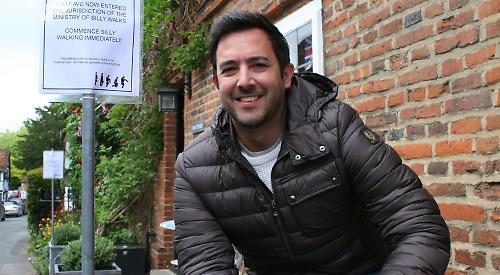 A MAN has been keeping his neighbours amused during the coronavirus lockdown by encouraging them to perform “silly walks” past his house.

James Ruffell, who lives in Sonning high street with his partner Caroline Jobbins, has set up a webcam in his front window which automatically starts recording when someone walks by.

He has put up official-looking signs which tell pedestrians: “You have now entered the jurisdiction of the Ministry of Silly Walks. Commence silly walking immediately.”

These are illustrated with silhouettes of comedian John Cleese performing a silly walk in the famous Monty Python sketch.

Some passers-by have attempted to imitate Cleese’s walk, in which he kicked his legs as high as possible with every step, while others have come up with their own versions.

They have twirled on the spot, skipped, waltzed around in pairs, pretended to run in slow motion, marched like soldiers or flopped their legs and arms around. One even performed a headstand.

Mr Ruffell, 37, who is a film and television cinematographer, has edited several reels of highlights and uploaded them to a dedicated YouTube channel and the Sonning Buzz page on Facebook. He has dubbed comic music over the footage and added effects like fast-forwarding or playing it in reverse.

He was inspired after reading on social media about a similar idea in America.

Mr Ruffell, who moved to Sonning about two years ago, said: “It seemed like a good idea because there’s much less traffic on the roads at the moment and people in this village have a great sense of humour.

“I had a webcam that I’d never used before and the front window was the perfect place to put it.

“I was able to watch on my phone and I was pleasantly surprised when people played along because I wasn’t sure if anyone would take any notice.

“I recognise quite a few of the people who have taken part, although none of our village’s more famous faces have appeared.

“I’m still hoping we might get a few and I was thinking about sending an invitation to Theresa May — you never know! It would be amazing if the Clooneys showed up. People are really enjoying it and it has brought a smile to their faces.

“I’ve been very impressed by the effort people have gone to, especially the headstand.

“I’ve always loved Monty Python and I was tempted to try John Cleese’s walk myself but I don’t think I could get my legs anywhere near that high.”

Since the lockdown started, villagers have been performing live music on their doorsteps during the Thursday clap for carers while the “Sonning Banksy”, an anonymous artist, left a trail of porcelain eggs around the village at Easter.

A heart-shaped rainbow has also been positioned on the nearby Playhatch roundabout, which has been used previously for visual gags by a mystery artist.

Mr Ruffell said: “People have come up with all sorts of ways to entertain each other during the lockdown. There’s a lot of creativity about.”

To watch the videos, search for Sonning Silly Walks on YouTube.