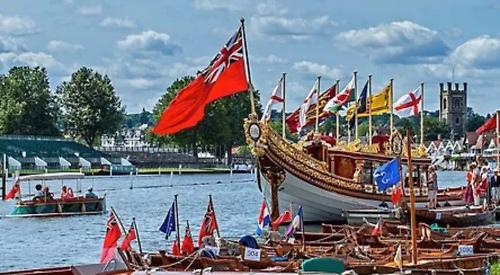 WILL the “Trad” be held this summer?

While the little group of volunteers who run the Thames Traditional Boat Festival are all more than eager to set this year’s ball rolling, we have had to await not just the Government’s covid rule relaxation but also Henley Royal Regatta’s decision about when and where it will hold this year’s event.

Fawley Meadows has been used for the “Trad” for more than 40 years but the land is now owned by the regatta and they use it to store big items such as pontoons and the floating grandstand.

While we might be able to move the pontoons and other bits of kit, the grandstand is a much bigger problem. It would cost thousands to move and even if we could find that money, we would have to have somewhere to put it. We can’t use it for the Trad as it takes up valuable bank space where the Dunkirk ships can moor and if we took it to the Fawley Court end of the meadows, where we might be able to juggle work boats, it would block the view down the river of boats doing their sail-past.

We have the added complication of the regatta having decided to try to strengthen the banks at Fawley Meadows, though, to correct something I have been told, we as an event have never suggested there was a problem with erosion. There is always erosion of river banks: this is the nature of rivers. It is often suggested that if the river was still dredged as it used to be, there would be a lot less erosion. However, this is out of all of our hands as the Environment Agency has forbidden dredging. The Romans dredged, the Anglo Saxons dredged... rivers have been managed for centuries as traffic routes. Had this continued, the regatta would not now be having to find a huge amount of money to try to create an “artificial” bank.

It does now look as if this work may not be done this year after all in which case if anyone could help us with the added costs of having to move the grandstand we might be able to run the Trad.

It will cost a lot more to stage this year anyway as we are usually able to use the regatta’s booms and take over pontoons that are already on this stretch of the river.

I feel very strongly that we should run the Trad. As I have said many times, it is the only summer riverside event actually held in Henley. It is not expensive for visitors and is a totally inclusive family friendly weekend. It is also a great educational tool and the value of this should not be overlooked. When people learn about things (in this instance, the river and boats and all their peripherals) while having fun, the information is more easily absorbed and retained.

So I am afraid it is still a matter of “watch this space” but I do hope not for very much longer.

Of course, if the regatta does decide to go ahead in Henley in August, we can move our event to the week after, which is not ideal but would save us finding the extra cost and trying to go for the last weekend in July.

We could do it at Mill Meadows but there is nowhere for the hundreds of cars to park.