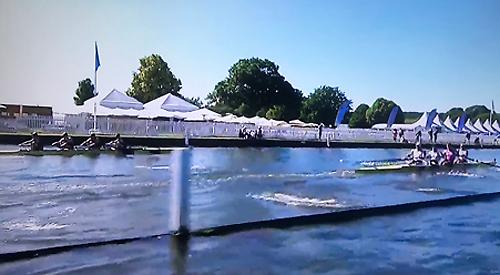 HENLEY Royal Regatta will go ahead this summer, subject to coronavirus restrictions.

Organisers announced on Monday that they are planning to stage the event in the week of Monday, August 9.

They have been given confidence by the success of the vaccine rollout and the Government’s roadmap out of lockdown.

The six-day event had already been postponed from July in a bid to avoid a second cancellation in as many years due to covid-19.

Other options were considered, including moving it to Dorney Lake, where the 2012 Olympic regatta was held, and members were asked their opinions.

It is “most likely” that the regatta will have to take place with a limited number of spectators and with reduced infrastructure on site. Sir Steve Redgrave, who chairs the committee of management, said the ambition was to stage the “best regatta possible”.

He said the regatta’s highest priority was the health and safety of all those involved in the event and the wider public followed by “our continued desire to offer the competitive pinnacle for the sport that Henley Royal Regatta represents and to which athletes and coaches can aspire as our sport emerges from lockdown”.

Sir Steve continued: “Based on our consultation, we are now cautiously but actively working towards staging the 2021 regatta at Henley as the primary planning scenario.

“It remains likely that only a limited number of members will be allowed to attend at any one time. In line with government and public health guidance, the introduction of infection control measures will form part of our planning.”

This year is supposed to be the first when the regatta runs for six days instead of five, with the extra day allowing for two new events for women, one for club eights and one for junior eights, making a total of 26.

But the new dates clash with the Junior World Rowing Championships, which are set to take place in Bulgaria from August 11 to 15, meaning some athletes will be unable to compete at Henley.

Sir Steve said: “We regret that these dates in August present an insurmountable challenge to some school and university boat clubs and, in particular, to athletes aspiring to international representation at the junior championships.

“However, given a wide range of factors, including the pre-existing schedule of other events due to be staged in Henley and the Thames Valley during the summer, the second week in August is the only practical option to accommodate a deferred regatta.

“We wish all those athletes who are selected to compete at the junior worlds the best of luck and look forward to welcoming them to race at the regatta in future years.”

Construction of the regatta course is now scheduled to begin in June.

The regatta committee is waiting on the results of government scientific research before deciding how much infrastructure it needs and the number of spectators it will allow into the enclosures.

These findings will be based on the impact of major pilot events of similar scale to be held over the spring and summer, including the FA Cup semi-finals and final at Wembley, which some spectators will be allowed to attend.

“So the possibility remains that staging the regatta at Henley this year may not be possible and, in the worst case scenario, the risk of outright cancellation remains.

“Given this uncertainty, there is no doubt that the regatta faces another difficult year.  However, both the committee and I have received many messages of support from stewards, members and potential competitors alike.  We clearly remain a beacon for the whole of the UK rowing family.

“In a crisis that has affected our sport so deeply, and with so many rowers now facing their second consecutive cancelled season, we are committed to trying to stage the regatta in some form this summer, in particular for the sake of our competitors.”

Henley Mayor Ken Arlett said the announcement was a boost for the town, especially businesses.

He said: “Everybody I have spoken to is pleased it is going to take place and that it is better here than at Dorney.

“They can’t control the number of visitors who congregate down the regatta course and the towpath and those coming into Henley.

“In the past we have seen queues 100 yards long outside places such as the Catherine Wheel with two or three people standing together.

“There is going to have to be some security at some of the pubs and restaurants  to enforce the government guidelines as I am sure there will still be some, such as social distancing.

“I wouldn’t say that the regatta is a lifeline for businesses as the majority of the shops will survive anyway but it will give everybody a bonus as hopefully there will be more visitors and more spending.

“I often walk around town and in the Market Place in particular you can overhear people saying that they want to see something different take place as they have been cooped up for so long.

“Hopefully, the Government will not need to change the roadmap and we can all have smiles on our faces again.”