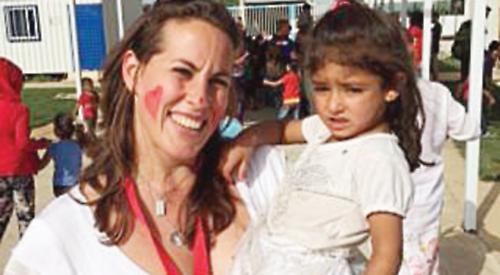 A WOMAN hopes to raise £10,000 for Syrian refugees by hosting a four-hour fitness challenge.

Victoria Wickins has been holding digital classes from her home in Scarletts Lane, near Wargrave, since the start of the coronavirus pandemic.

She receives voluntary donations for her time and has so far raised £3,673 for True Vine Church in the Beqaa Valley of Lebanon.

On June 6, starting at 1pm, she will be running high-intensity interval training (Hiit) sessions in blocks of 25 minutes each but she and a group of 12 people have agreed to do the full four hours.

Participants are welcome to join online via Zoom and can complete as many sessions as they want but they should obtain sponsorship to take part.

Mrs Wickins, 41, who runs the Fiit Warrior classes three times a week, said: “Please pray that we make it through this.

“A Hiit session that I normally run over Zoom would last 20 to 30 minutes. This will be eight in a four-hour period. It is pretty bonkers but I have the determination to complete it.

“The refugees really need this love and support. I’ve struggled a little to get people to really understand because this is not as relatable as many of the causes on our doorsteps. It is far away and not on the front pages but it is an ongoing crisis. Normal people have been ripped away from their lives and spat out into a situation where they’ve lost their identity, their jobs and homes, but many have also lost their families.

“The only way I can get people to relate to this is to imagine it happened to them.”

Mrs Wickins estimates there will be room for about 30 people in her garden, with a Zoom call running throughout for people from all over the world to join.

Mrs Wickins said: “The idea is to make it as accessible as possible and to give people the chance to do whatever is challenging for them.

“I’m hoping people will jump on board, get sponsored and try to do a big push for these people in Lebanon. If even an hour is a challenge, then do an hour.

“I never asked people to pay me for the Hiit sessions and in the beginning I did them five days a week. I plan to continue with it until we are out of lockdown completely.

“Some people are very committed and come to every session and give me a monthly donation and treat it like a gym membership. I wanted to bring it to a close and if we can smash the £10,000 target that would be absolutely amazing. I would love to fly out there and take some videos to show people back here what their money is being used for.”

Mrs Wickins, who works in admin, was first inspired to help Syrian refugees after her husband Vaughan took part in a marathon in Jordan in 2016 in aid of Open Doors, a Christian charity which helps persecuted people around the world.

He and his wife took part in a 63km “ultra-walk” in Lebanon the following year and have raised £10,000 between them.

They have two daughters, Isabel, nine, and Chloe, eight, who attend Robert Piggott Junior School, while their five-year-old son Noah is at the infant school.

The True Vine Church has been helping refugees since the beginning of the crisis in 2011. There are more than 800,000 refugees in Lebanon alone and in the Beqaa Valley area there are 336,000.

The church provides food, education and healthcare every month as well as clothes, blankets, fuel and hygiene kits.

Mrs Wickins said: “What we saw has never left me. I was so moved by it and particularly with the covid situation it is particularly hard.

“Being in lockdown with my family and safe is different to a tented camp full of refugees. They can’t earn money and feed their families and on top of that Lebanon is going through a financial crisis. None of the children are allowed to go into Lebanese schools and 50 per cent of the refugees are children.”

This is not the first fundraising challenge that Mrs Wickins has attempted.

In November, she ran 100 miles to help raise money for the treatment of eight-year-old Hollie Beattie, from New Zealand, who was diagnosed with neuroblastoma two years ago.

Hollie and her mother Johanna have been in Barcelona since January to take part in a clinical trial that could save her life.

Mrs Wickins, along with a group of friends from Queen Anne’s School in Caversham, helped raise the equivalent of $25,000 NZD.

She said: “Despite all of the things Hollie has gone through, she keeps an incredible smile on her face and she is such a little fighter.”

If you would like to take part, email victoria.wickins@googlemail.com

• Before the Middle East conflict began, Syrian people campaigned against high unemployment and corruption, which inspired protests. The Government responded with force and in 2011, millions of people fled Syria after civil war broke out and terror group ISIS began incursions into the country. Refugees have sought asylum around the world but the vast majority live in neighbouring countries.