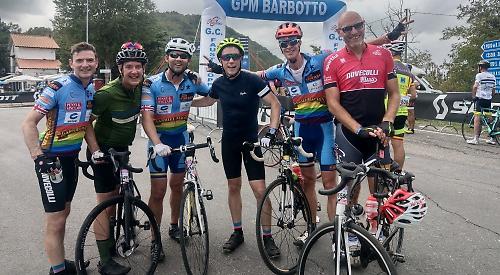 The cyclists wore sponsored jerseys from another bike ride to Paris in 2017 when 30 riders raised more than £40,000 for Trinity Primary School and the Chiltern Centre for disabled children.

The men, who are fathers of Trinity pupils, said they had missed the camaraderie of the 24-hour ride to France and wanted to recreate it, so decided to take part in the Nove Colli ride in Cesena.

Ben Walsh, Johnny Knight, Andy Marrison, Adam Holden, Brian Walmsley and Paul Coleman were unable to fundraise this time as they didn’t know if the ride would go ahead due to the coronavirus pandemic.

Mr Walsh, 46, of St Mark’s Road, Henley, said: “We wanted to do something that was more than just a cycle round Henley but it wasn’t confirmed to be going ahead until three weeks beforehand.

“Some of us hadn’t done any training as we thought we weren’t going to go so once we found out we had to quickly jump on our bikes.

“Some people go out all the time but most of us enjoy it for the camaraderie.

“I’m not the kind to get on my bike but I’m keen to support and raise money for the school.

“I think in particular with the school having gone through covid, there’s a lot of things it will need support with, such as new tech stuff.”

Now Tom Potter, a governor of the school in Vicarage Road and the organiser of the 2017 cycle ride, is planning to arrange a 24-hour ride to Bruges next year.

Mr Walsh said: “When we told him we had just completed the Nove Colli wearing the same jerseys he said that it was brilliant. We’ll do a lot more practice in advance this time and get ourselves in shape but it’s not a small undertaking.”

Mr Potter said: “We were planning to do the ride to Bruges in 2020 but it didn’t happen due to covid and for the same reason it didn’t happen this year. We are now aiming for early summer next year.

“We have got huge interest from local people, not just from parents and from parents at Trinity, and so we are going to open it up to allow fundraising for all state schools in Henley. We have got 40 riders signed up so far and we have some sponsors but we need more.

“As a governor, I am conscious of the financial condition of state schools and the importance of fundraising for charities such as the Chiltern Centre to keep doing the good work they do.”