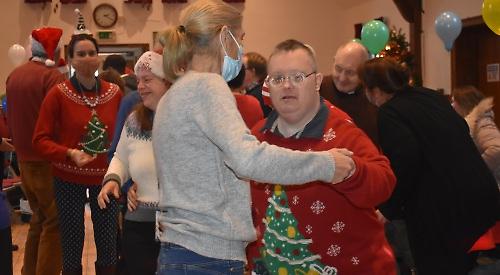 ABOUT 60 members of the South Oxfordshire Mencap Society attended a Christmas party at Harpsden village hall.

The event, which was cancelled last year due to the coronavirus pandemic, featured dancing, a game of pass the parcel, a Christmas tea and a visit from Father Christmas. DJ Peter Roberts, who has provided the music at Elton John’s white tie and tiara charity ball for 28 years, played seasonal songs such as Mariah Carey’s All I Want For Christmas and Wham!’s Wake Me Up Before You Go-Go.

Henley Mayor Sarah Miller attended the event. Paul Barrett, who chairs the branch, said the party was “fantastic” and everyone was pleased to see each other after the coronavirus restrictions prevented them from having parties.

He said: “Everyone really enjoyed themselves because it has been two years since we’ve had a party and were so pleased to be able to see their friends again.

“The only disappointment was that a lot of people were unable to make it because some carers couldn’t get away on a Sunday or people had problems with transport and some people had covid scares and had to stay away.”