‘Trad’ festival back for 43rd year 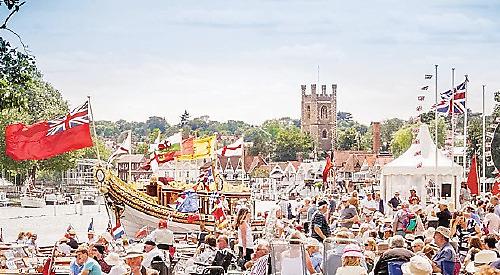 A PARTY was held at the River & Rowing Museum to launch this year’s Thames Traditional Boat Festival.

This will be the 43rd year of the event, which began as a small rally of enthusiastic owners of classic river boats and has become the largest gathering of traditional river craft in the world.

It is also a family-orientated weekend on Fawley Meadows in Henley with something for people of all ages.

The Dunkirk “Little Ships”, which took part in the evacuation of Allied troops from France in 1940 during the Second World War, will be the main focus of this year’s event as usual.

The famous boats parade up and down the river, flying colourful flag bunting.

The river bank will be lined with scores of beautiful wooden boats, including skiffs, slipper launches, motor yachts and cabin cruisers, as well as electric and steam boats, military craft and even some amphibious cars. Other attractions will include classic and vintage cars, motorcycles and bicycles, including a penny farthing, traction engines and fly-pasts performed by First World War planes and Spitfires from the Battle of Britain.

There will also be some shire horses, a fairground and other children’s entertainment as well as Paul Clerehugh’s pop-up Crooked Billet, street food vans using local produce for a variety of ethnic foods and local beer and gin.

Lady McAlpine, who
co-chairs the festival, said: “Last year saw a diminished number of traders and entertainment because we had to change from our usual date to the August bank holiday.

“This year our regulars are back and we already have an enormous increase in the number and variety of traders, from those selling essentials for small river craft to boatyards selling modern boats often alongside the classics.

“There will again be an entire street of antiques and boat jumble. Naturally, we aim to make this year’s event the ‘best yet’. Once again, we are asking for volunteers for various roles: we could not run the event without them.”

She thanked the Shanly Foundation for its continuing support of the festival and estate agents Hamptons, a new sponsor.

Lady McAlpine added: “We are indebted to the River & Rowing Museum for allowing us to use its gallery for our party and to the Chocolate Café for its catering and such good-natured staff.”

This year’s festival will take place from Friday to Sunday, July 15 to 17. For more information, visit www.tradboatfestival.com