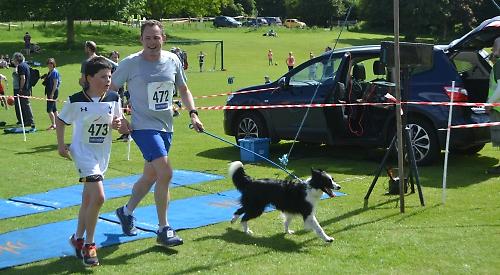 MORE than 600 people took part in the 12th annual Chiltern Chase in Ewelme on Sunday.

The event comprised three races of 5km, 10km and 15km with the runnners setting off from Ewelme Common and running around the Chiltern Way.

Nicole, who goes to Leighton Park School in Reading, took part with her father Chris, who ran the 10km event.

She said: “I found it really good and enjoyed it. This was my first time but I’ll come back.”

Nicole took the lead on the final straight when she passed Andy Phelps — with his blessing.

Mr Phelps, from Abingdon, said: “I went past her at 4km but she stayed with me and was only 20m behind near the end.

“I thought it would be right to slow down and let her get past. It might be the only time she wins a race with adults in as well and it’s nice to encourage the youngsters.”

Peter Cook, of Belle Vue Road, Henley, won the 10km in a time of 35 minutes and 37 seconds. The 18-year-old, who runs for Reading Running Club, said: “I ran in this years ago, when I was much younger.

“It was a really nice route and I’ll definitely do it again next year.”

The 15km race was won by James Chettle, from Oxford, but the race was marred by controversy after some runners claimed they had been sent the wrong way by a marshal.

Fun runners included a woman in a Wonder Woman T-shirt, a man who waved a Brazilian flag as he ran down the final straight and a group of Nordic walkers who walked the route using sticks.

Steve and Arthur Schrier, from Cane End, took part with their dog Harry and all three received a finisher’s medal.

The event is organised by the parent-teacher association at Ewelme Primary School and has raised more than £70,000 in 12 years. The proceeds are split equally between the school and a chosen charity, which this year is South Central Ambulance Service.