Discover beauty in everyday Henley from its river to ruins 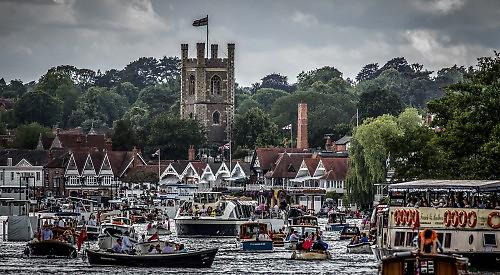 Everything about it in fact, from its people, the buildings, the river, even the minutiae of everyday life.

He takes pictures of anything and everything and likes nothing more than rising to the challenge of finding beauty in the most unattractive or unwilling of subjects.

Next month he is staging an exhibition of work around this theme at the Old Fire Station Gallery, which sits behind Henley town hall in Market Place.

HoT Pictures, his first solo exhibition since 2013, will comprise more than 50 photographs that are designed to make visitors look at and appreciate the town in a different way.

There will be pictures capturing Henley and the surrounding Chilterns at their most recognisable — but there are also displays called “Steam”, “Dereliction”, “Planet Henley” and “Hidden Henley”.

The last of these will be familiar to regular readers of the Henley Standard, as Martin supplies a “curiosity” each week for the Diary page under the same name.

Martin, 68, who lives in Gainsborough Hill, doesn’t leave the house or go to work without a camera, so he’s ready if something catches his eye — whether it’s a pile of leaves or a ruined building.

“I live here and I just love it,” he says. “The exhibition is to share my love of the town and the area around it. It is just such a great place. I try and make the everyday — the things the people would otherwise walk past and not notice — and make them look exceptional by bringing them to life.”

One way he does this is by compressing the perspective of the image so that the subject appears greater than it is. He also experiments with a narrow area of focus.

“A narrow focus really makes the most of dead space,” Martin explains. “You then cannot help but make eye contact with the subject of the picture — the part that’s in focus, the part I find most interesting, such as a person’s eye.

“I like to take pictures of anything that’s curious but I am hoping I can make a lump of coal interesting if you get the right angle. With the right imagination you can make anything look interesting or sexy.”

This goes some way to explaining the different themes of the exhibition.

Martin says: “I have a whole series of pictures with steam or mist or smoke, which gives a new point of view on a natural or iconic scene, while another series focuses on ruinous things which people would walk by without a second thought.

“Planet Henley is so called because I wanted to get the effect of 180 degrees or more and so I invested in a fisheye lens, which produces a complete circle and gives the most amazing views.”

Martin’s parents lived in Hambleden when he was born at the former hospital in Watlington and they later moved to Park Road in Henley.

He attended Trinity School and the Maidenhead Grammar School before studying art at East Berkshire College. He has had various jobs, including as a trolleybus conductor in Reading, before he started work in print sales in London and then at Higgs Group, publisher of the Henley Standard.

Photographing people has been a passion since he was a boy and his first attempt at the age of nine was taken on a box camera he found at home. One of his first shots was a black and white photograph of his younger brother, Barry, which won him 10 shillings in a competition.

Martin, who has lived in Henley for 21 years, now uses a Canon digital camera and carries around with him a backpack full of lenses which weighs about 5kg.

In addition to taking pictures of scenes and things, he also accepts wedding commissions and regularly turns up to parties and black-tie events for the Henley Standard’s Picture This page.

Martin says he has tens of thousands of pictures at home and jokes, “One day I will take a good one!”

He adds: “I have always loved photography, but if you have got the talent you are probably a painter, so I express it with a camera.

“What would give me a kick is if people came and enjoyed looking at the pictures and celebrate Henley as I do.”

l HoT Pictures will be held at the Old Fire Station in Henley from September 30 to October 2. Prints will be available to buy from £15.